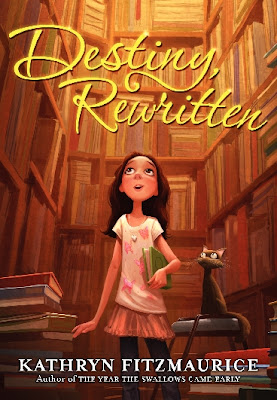 Des·tin·y: (noun) The hidden power believed to control what will happen in the future; fate.

Eleven-year-old Emily Elizabeth Davis has been told for her entire life that her destiny is to become a poet, just like her famous namesake, Emily Dickinson. But Emily doesn't even really like poetry, and she has a secret career ambition that she suspects her English-professor mother will frown on. Then, shortly after discovering that it contains an important family secret, she loses the special volume of Emily Dickinson's poetry that was given to her at birth. As Emily and her friends search for the lost book in used-book stores all across town, Emily's understanding of destiny begins to unravel and then rewrite itself, in a marvelous new way.

In her third novel, Kathryn Fitzmaurice again weaves a richly textured and delightful story about unexpected connections, about the ways that friends can help us see ourselves for who we truly are, about the stories that shape our lives, and about the most perfect kinds of happy endings: those that happen just on time.

I read this book over the holidays, and it's fitting. I knew that I had to be the Grinch because my heart grew two sizes the day I finished reading Destiny, Rewritten. It felt as if it would burst right out of my chest because I was felt with such overwhelming happiness and love for the characters, who are some of my all-time literary favorites. There is not one person in the book that I did not want to scoop up and squeeze into a bear hug.

Destiny, Rewritten taught me something that I have been overlooking about myself - I LOVE stories that make references to other stories or pieces of pop culture. I found myself giggling several times throughout the book because of arguments that Emily Elizabeth Davis and Wavey St. Clair, her best friend, would have about female roles in Star Wars, Little House on the Prairie, or even paper towel commercials. This was a perfect little running joke (it has to be a joke because it was so hilarious!) to go along with Emily while she searched to find her lost book, unknown father, and herself. Emily's letters to Danielle Steele and love of romance novels' happy endings are also so brilliantly woven into the story. There are also tree-huggers, used bookstores, a cashier from Goodwill who is all things awesome, and more minor characters who kept me beaming.

My absolute favorite part of the book, however, was that each child in the story was encouraged to be their very best at whatever they did. The children were supportive of each other, and not one of the adults ever treated any of them as anything less than the intelligent, nerdy, brilliant balls of potential they were. Yes, there are bullies and adults telling kids "There's no way you can do that!" in the real world, but there are so many people who are the polar opposite of that, and I think the book is a lovely homage to them. Cecily Ann likes to give science reports in poem form, but no one really gives her a hard time. Montie is an eight year old little boy who is counting the days until he can join the army, but nothing is said to dissuade his dreams or soldier-in-training behavior. Connor Kelly, Emily's crush, even had an entire conversation with her in haiku during English class. I seriously want to live in their neighborhood and be friends with all of them.

This is far and away one of the best books that I read in 2012. Yes, it is contemporary (which I usually avoid), but Destiny, Rewritten is full of the magic of innocence and childhood. It reminds us that it's okay to be yourself, it's okay to chase your dreams, and sometimes your happy ending is where you least expect it.

To satisfy FTC guidelines, I am disclosing that I received a digital ARC of the book from the publisher in exchange for an honest review. This has in no way affected the outcome of my review. All opinions expressed are rambling, honest, and completely my own.