Review: The Cadet of Tildor by Alex Lidell 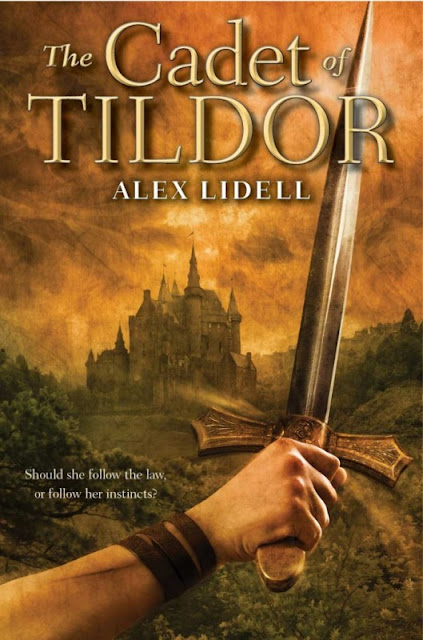 There is a new king on the throne of Tildor. Currents of political unrest sweep the country as two warring crime families seek power, angling to exploit the young Crown's inexperience. At the Academy of Tildor, the training ground for elite soldiers, Cadet Renee de Winter struggles to keep up with her male peers. But when her mentor, a notorious commander recalled from active duty to teach at the Academy, is kidnapped to fight in illegal gladiator games, Renee and her best friend Alec find themselves thrust into a world rife with crime, sorting through a maze of political intrigue, and struggling to resolve what they want, what is legal, and what is right.

The Cadet of Tildor is both an intelligent and entertaining novel, without being something that could be intimidating to more reluctant teenagers. Lidell weaves political intrigue, excellent fight scenes, and realistic relationships that are not centered on romance between her main characters. As many fans of fantasy novels well know, the stories can sometimes be formulaic, but The Cadet of Tildor is fresh and exciting.

Renee de Winter is a heroine who I think is a fantastic role model for teens, as well as a fun character to read. She follows her dream of becoming a Servant of the Crown, despite the fact that very few females make the cut. She grows through the book as she tries to figure out what is wright and for whose sake things should be done. Her friends, Sasha and Alec, are good side characters, but I feel that they were mainly tools used to show how Renee was changing and growing (not that it's a bad thing). The way Renee interacted with Commander Korish Savoy also showed us a great deal about what kind of character she was - stubborn and unwilling to give up. The best thing about the relationship between Renee and Savoy is that it wasn't focused on love, as you may expect, but more of a comrades-in-arms. (We shall see how it goes in a sequel, if there is one.) Renee also takes Diam, a little boy at the Academy, under her wing, in a sense. He is absolutely adorable and one of my favorite things about the book.

While the characters were a very entertaining aspect of the novel, the themes were also important. The mages in the novel are discriminated against and forced to register once their powers manifest or face terrible consequences, which could be execution. This, in addition to the crime families and their dealings, really makes the reader, as well as the character, question what is right and if it is always right. I think this would be a great classroom book due to the depth of the novel and the entertainment value. The Cadet of Tildor is a wonderful debut, and I look forward to reading more of Alex Lidell's work in the future.


Be sure to order your copy of The Cadet of Tildor today!
Amazon | Barnes & Noble | Book Depository | Fishpond | IndieBound

To satisfy FTC guidelines, I am disclosing that I received the book for reviewing purposes as a part of a Debut Author Challenge ARC Tour in exchange for an honest review. The advance copy was likely provided to the tour by the publisher or author, which has in no way affected the outcome of my review. All opinions expressed are rambling, honest, and completely my own.