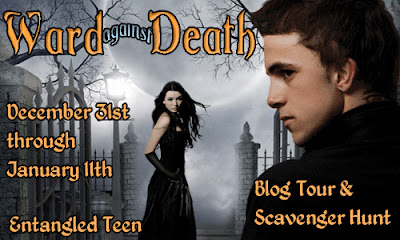 Welcome to my stop on Entangled Teen's Ward Against Death blog tour! I am so excited to take part in this because scavenger hunts are so much fun, and I may be a little bit addicted to them. (By the way, you may want to keep an eye out for the color red.) Somewhat off topic, I met Melanie at Authors After Dark in New Orleans this past August, and she is such a super nice lady. I bought the book after hearing her read an portion of Ward Against Death at a panel, and I'll be posting my review soon. I hope you'll enjoy learning about Ward Against Death and Melanie, and I wish you the best of luck in the Scavenger Hunt!

Ward plastered on his calmest, gentlest expression. The newly wakened dead often assumed they had just roused from sleep. “You’ve been unwell.”

“Unwell? Is that what my father told you?” A hint of dark colored her tone.

“Yes, well... in a manner of speaking.” She wasn’t acting the way she was supposed to. Noblewomen, particularly those around his age, were usually demure or aloof. They weren’t... suspicious.

“Well, I’m fine, and I’m sorry my father troubled you.” She threw back the covers, sat up, and stepped onto the thick rug. “Now go, be a good doctor, and tell my family I’m healthy and sleeping.” She punctuated her last word by pulling her nightdress over her head, revealing a slim waist, athletic muscles, and pale skin marked with the purple bruises of livor mortis along her back. And no other clothes.

“But—” He flushed and spun around to face the wall. “What are you doing?” No. Wait. What was he doing? He’d seen a dead naked woman before. Just never like this.

She chuckled. “I’m going for a walk.”

“A what? No— You can’t.” She really wasn’t acting the way she was supposed to.

The situation was spiraling out of hand. Damn it, he had to take control. He was the necromancer, she the newly awakened. She was supposed to listen to him.

He turned to confront her. Thankfully, she was fully dressed—in men’s clothes, but at least she was dressed. “Listen, I—”

She slipped her hand under her pillow and removed a sheathed dagger.

Ward Against Darkness(Chronicles of a Reluctant Necromancer #2)
Coming July 2013! 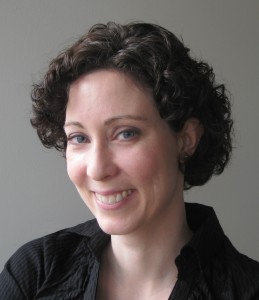 I have always been drawn to storytelling. In fact, I can't remember a time when I wasn't telling a story in my head or on paper. In grade school, we had journal writing time which I turned into story telling time, weaving tales of magic and adventure that mimicked the fairy tales and myths that I loved to read. It was there, with the help of two very special teachers, that I nurtured this love and started my journey as a writer.

I write fantasy, paranormal romance, and everything in between, seasoned with a good dash of adventure and mystery. Join me on my tales of magic, adventure, and romance.

You could win either: