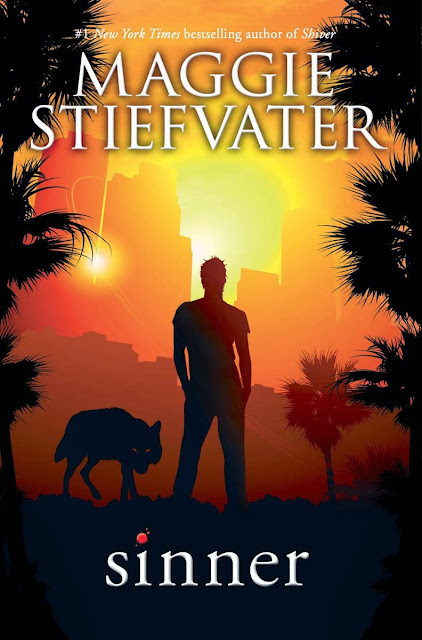 Cole St. Clair has come to California for one reason: to get Isabel Culpeper back. She fled from his damaged, drained life, and damaged and drained it even more. He doesn't just want her. He needs her.

Isabel is trying to build herself a life in Los Angeles. It's not really working. She can play the game as well as all the other fakes. But what's the point? What is there to win?

Cole and Isabel share a past that never seemed to have a future. They have the power to love each other and the power to tear each other apart. The only thing for certain is that they cannot let go.

I loved Stiefvater’s first book in The Wolves of Mercy Falls, Shiver, but was extremely disappointed in how she ended the series in Forever. I thought I would never read anything else by her until I read, and fell in love with, The Scorpio Races. I wasn't sure if I would read Sinner until Kayla awesomely scored me an ARC, and I held it in my hands.

There is just something beautiful and lyrical about Stiefvater’s writing that draws me in. Even if I don’t like the plot or the progress of the story I will always appreciate the writing. I’m pretty sure that my copy of Sinner has the most sticky notes I’ve ever put in a book because of all the quotes I had to tab. I cannot do justice to Stiefvater's writing, but if you've never experienced it, I suggest picking up one of her books.

I do not know if I would recommend picking this up first, as it’s part of The Wolves of Mercy Falls series, even though it is described as a “standalone companion” to that series. There is just so much wolfy backstory about Cole and Isabel that a reader would miss without reading the first three books first. However, this book is also completely apart from the rest of the series and it is thoroughly Cole’s and Isabel’s story. The rest of The Wolves of Mercy Falls is paranormal young adult, but Sinner is a contemporary almost-adult story about a dysfunctional relationship with a very slight paranormal element.

I’m really glad that we have a book all about Cole and Isabel because they were such awesome and intriguing characters in the series. I also like that there really isn't any discussion about the wolf cure, and becoming a wolf is only a release for Cole and a point of grief for Isabel.

Sinner is mostly a story of redemption with a little bit coming-of-age and learning who you are thrown in. Cole is a fascinating person, especially since he tries to self-medicate his probably bi-polar disorder with first drugs and alcohol, then losing his mind in becoming a wolf. The foil to this is Isabel, who prefers to ignore all of her emotions, which she just doesn't quite accomplish. I loved seeing these two come to terms with each other and themselves, especially since both of them suffered from self-hatred yet could come to love each other. Both Cole and Isabel have serious issues which causes their relationship to be quite dysfunctional, but the issues make the relationship feel all the more real.

The story is set against a backdrop of Los Angeles and reality television. Stiefvater, of course, explored the highs and the lows of both the medium and the city, and Cole’s relationship with both. There really isn’t a lot of middle ground in the whole book, be it plot or characters. Even the secondary characters are extreme versions of people. Cole’s limo driver and later friend, Leon, is almost too sugary-sweet too-good-to-be-true set against Cole’s destruction and depression and Isabel’s anger. With the reality television show producer trying to get Cole to go over the deep end with several stunts and Isabel’s less than perfect home life, the tone of the plot goes from manically happy to desperately depressing to hysterical.

I loved every second of Sinner and was incredibly sad when it came to an end. If you liked or loved The Wolves of Mercy Falls and are interested in seeing Cole’s and Isabel’s story, I strongly recommend picking up Sinner. Now, why isn’t it October already so I can have my hands on Stiefvater’s next book in The Raven Boys series, Blue Lily, Lily Blue?

To satisfy FTC guidelines, I am disclosing that I received an advance copy of the book from the publisher in exchange for an honest review.