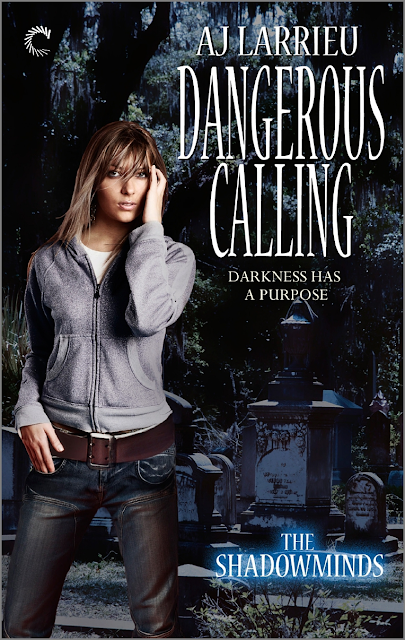 After years of denial, Cass Weatherfield has finally accepted her telekinetic gifts. Living with her boyfriend, Shane, has given her the confidence to be herself, but the fear of losing control and harming those around her is always present.

Knowing firsthand the hell of growing up without a mentor, she agrees to meet and help Diana, a young Shadowmind. But when Cass shows up, the terrified woman changes her mind and flees. Cass and Shane track her across New Orleans, and soon discover that Diana is being held against her will by an illicit organization that’s selling her rare clairvoyant skills to the highest bidder. In charge is an ancient creature more powerful than any they’ve ever encountered. And apparently she wants Shane dead.

Cass and Shane work to free Diana. But as Cass uses more and more power, drawing it from her friends in the fight against evil, she feels an addictive pull that challenges her control. And, in the end, Cass may be the greatest threat to those she loves the most.

Like Twisted Miracles the major positive of Dangerous Calling is the world of paranormals (And this is set in Louisiana, centering on New Orleans and even venturing into Baton Rouge this book!). We were introduced to shadowminds in Twisted Miracles, and in Dangerous Calling we get a few more paranormal creatures. I really enjoyed Diana and Ian and wish that we would have learned more about them, especially more about their personalities. I feel like we got more of a rough sketch of them rather than full characters.

One of the main reasons that I enjoyed Twisted Miracles was that it didn’t involve the normal paranormal beings - vampires, werewolves, fairies, etc. Shadowminds were a little bit psychic and a little bit something else. So, I was more than a little disappointed when a vampire popped up in Dangerous Calling. And, not just any vampire, but the most clichéd vampire - super strength and Freddie Kruger unstoppable.

I feel like the introduction of the new characters and paranormal creatures had the world building take more of back burner. I had a lot of questions about the shadowminds at the end of Twisted Miracles, and although a few of them were answered, there were still a lot of unanswered questions at the end of Dangerous Calling. Although there does seem to be a larger story arc which could answer those questions, and I like where the story arc is going. I also like that although there is a "healer" among the shadowminds, the main characters are not invincible and can be seriously, even fatally, hurt.

There were also a few plot points that annoyed me in the beginning, but by the middle of Dangerous Calling, the plot and pacing leveled out and I began to enjoy myself again. Mostly I just thought that the author added in some plot elements that were unnecessary just to advance a certain storyline. The really annoying moments only induced eye rolling and not putting the book down.

I'm already looking forward to the next book in the series. I know I'm spoiled that both of the first two books released this year, because I was surprised and sad to find out that there is no release date or information on the next book. But while searching around for more information on the author and series I realized that I need to check out more books from Carina Press. I didn't realize that Carina was one of Harlequin's digital first imprints. Although I've only read Larrieu's books from the press, I've liked what I've read so far.