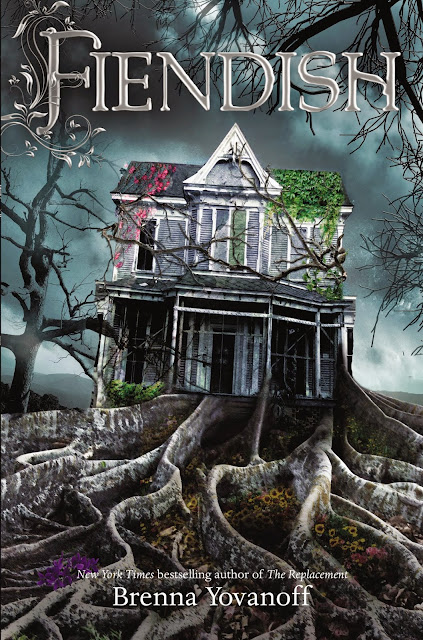 Now she’s out and determined to uncover who put her in that cellar and why.

When Clementine was a child, dangerous and inexplicable things started happening in New South Bend. The townsfolk blamed the fiendish people out in the Willows and burned their homes to the ground. But magic kept Clementine alive, walled up in the cellar for ten years, until a boy named Fisher sets her free. Back in the world, Clementine sets out to discover what happened all those years ago. But the truth gets muddled in her dangerous attraction to Fisher, the politics of New South Bend, and the Hollow, a fickle and terrifying place that seems increasingly temperamental ever since Clementine reemerged.

When I first saw that wonderfully creepy cover, I just knew that I had to read Fiendish. The author combines a lot of elements with magical realism and the result is a beautifully written, creepy take on small town life. There's a little bit of tarot cards mixed with witches but with a little bit hillbilly thrown in as well. Add in some young star-crossed lovers and small-town prejudices. Speaking of tarot cards, this is one of several books I've read this year concerning the mystical cards, and I'm really liking all the different translations and uses of the cards. But all this adds up to a great take on magical realism that is just a little bit shy of horror. I loved the mix of bold and subtle changes of normal mysticism and magic from witches to "craft" and the elements to Dirt, Creek, Heat, Light and Breath, among others.

The best part of Fiendish is the gorgeous writing. Yovanoff has such a way with imagery that I could feel and see everything and felt like I was a part of the novel.

Because the plot is about Clementine finding out what happened ten years ago to her town, which left her buried alive in her cellar, the reader finds out the whys and hows along with Clementine, but at a slow and steady pace. Everyone in the town is damaged to some degree by the events of ten years' past called "the reckoning." Although the town is divided by those with the craft and those without, it could easily be any other small town, which are normally divided by those on the right and wrong sides of the tracks.

The characters, including the large cast of secondary characters, are well drawn out because everyone is damaged and most are hiding his or her own secrets. And Clementine is going into town stirring up trouble by ferreting out the town's secrets along with her own. I loved that not all the "good" people were good, and the same goes for the "bad".

All in all, Fiendish was a beautiful and strange tale with a lot of different and sometimes confusing elements thrown in. I recommend it to anyone who wants to try out a darker, stranger book of witchcraft and magic.

To satisfy FTC guidelines, I am disclosing that I received an advance copy of the book from First to Read in exchange for an honest review.