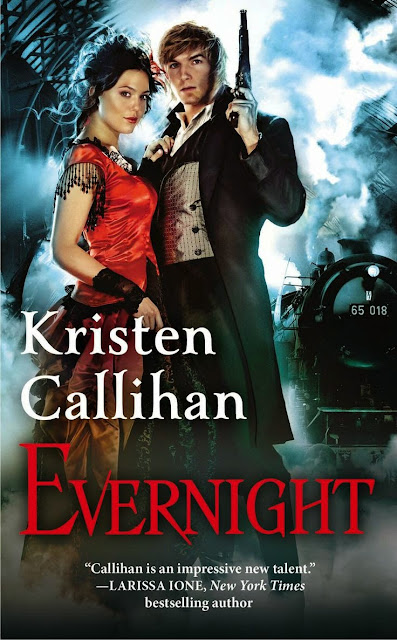 Will Thorne is living a nightmare, his sanity slowly being drained away by a force he can't control. His talents have made him the perfect assassin for hire. But as he loses his grip on reality, there is no calming him—until he finds his next target: the mysterious Holly Evernight.

Love must cast aside the shadows . . .

Holly cannot fathom who would put a contract on her life, yet the moment she touches Will, the connection between them is elemental, undeniable—and she's the only one who can tame his bouts of madness. But other assassins are coming for Holly. Will must transform from killer to protector and find the man who wants Holly dead . . . or his only chance for redemption will be lost.

Darkest London is one of my favorite steampunk/historical romance series out right now. Will Thorne and Holly Evernight may have just been my favorite couple yet!

I felt so bad for both Thorne and Holly - Holly for being forced into hurting people, Thorne included, and Thorne for being tortured into a monstrous being and a painful wreck of who he used to be. From the beginning, these two make for an interesting and amazing story. The novel almost immediately begins with a bang, with Holly protecting herself from Thorne and other assassins trying to kill her (because Thorne blames Holly for his current maddened state). Then, once Thorne realizes that Holly can calm him and make the metal retreat, they make a deal. Thorne will protect Holly from whomever is trying to kill her, and Holly will calm and soothe Thorne from the madness and metal.

Holly is just awesome. She's a brilliant inventor who hides behind an outer frosty exterior to protect herself. She's also extremely capable of physically protecting herself. There are quite a few scenes in Evernight where Holly gets to kick ass, and I loved it. Will is that perfect blend of tortured (physically and emotionally) hero with just enough snark and playfulness to be loveable.

This series runs the gamut of supernatural creatures, which is one of the best parts. There are elementals (Holly can control metal, Miranda can control fire, etc.), werewolves, shifters, fae, demons (Thorne, although he has shifted into another type of being by this novel) and more. Callihan has also created a GIM, or Ghost in the Machine, which for simplicity's sake, is a clockwork based ghost who is controlled by another being through a bond, but who is a solid being most of the time. Callihan has really brought this world and series a long way since Firelight and its Beauty and the Beast re-telling quality.

Aside from the fantastic world and characters, Callihan's writing is also as great as ever. She weaves enough humor in with the suspense and romance angst that I am always thoroughly entertained. Also, I don't really remember the sexy-time scenes from the past books, but the ones in this one are really hot and steamy - Callihan has really stepped up her game in that regard.

My only real complaint is the ending, which is hard to discuss without spoilers. Suffice it to say, something happened which I thought was unbelievable and there was no explanation to make it more believable. I re-read the last few pages before the Epilogue several time thinking that I had missed something. I've had this complaint a few times over the series (wherein I would have to re-read something because I felt that Callihan had skipped over some plot points).

Also, I'm not so sure if I like Adam. In the past, he hadn't really made much of an impression on me, but in Evernight he really brought out the jerk. I'm kind of worried about the next, and apparently last (nooooo), book in the series, Soulbound, because Adam is the love interest. Yet, that won't stop me from reading it, and whatever else Callihan writes next.