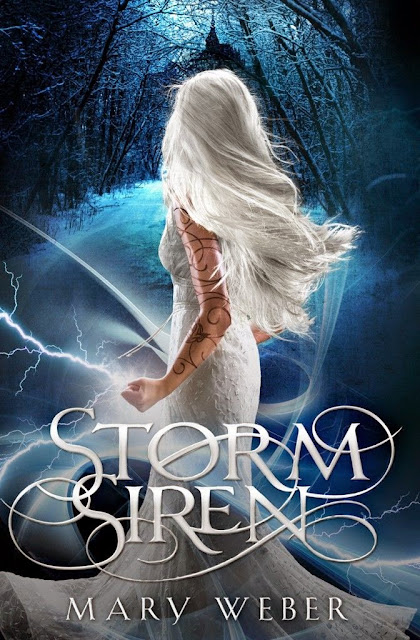 “I raise my chin as the buyers stare. Yes. Look. You don’t want me. Because, eventually, accidentally, I will destroy you.”

In a world at war, a slave girl’s lethal curse could become one kingdom’s weapon of salvation. If the curse—and the girl—can be controlled.

As a slave in the war-weary kingdom of Faelen, seventeen-year-old Nym isn’t merely devoid of rights, her Elemental kind are only born male and always killed at birth — meaning, she shouldn’t even exist.

Standing on the auction block beneath smoke-drenched mountains, Nym faces her fifteenth sell. But when her hood is removed and her storm-summoning killing curse revealed, Nym is snatched up by a court advisor and given a choice: be trained as the weapon Faelen needs to win the war, or be killed.

Choosing the former, Nym is unleashed into a world of politics, bizarre parties, and rumors of an evil more sinister than she’s being prepared to fight . . . not to mention the handsome trainer whose dark secrets lie behind a mysterious ability to calm every lightning strike she summons.

But what if she doesn’t want to be the weapon they’ve all been waiting for?

Set in a beautifully eclectic world of suspicion, super abilities, and monsters, Storm Siren is a story of power. And whoever controls that power will win.

Storm Siren had a lot of potential, it just didn't quite get to great. The best part was the characters, but even those weren't as strong as they could be. Some of the secondary characters were awesome - Colin and his sister. I was so excited that Colin and Nym had a pretty much platonic relationship. I thought I was going to love Nym at first. She was strong but compassionate. She had some spunk, but she needed some self esteem. We meet her at a slave auction, where she is being sold for the 14th or so time, and she is "rescued" by a crazy person who wants to use her as a weapon in her kingdom's war. Yet, she never really grew up. She never got past that her "curse" was dangerous, but if she would have just learned to control it instead of fight it, she would have been less dangerous. Also, I just didn't care about the love story between Nym and Eogan. Storm Siren would have been much better without it.

The writing was choppy in parts, and there were a lot of made-up words like "crazylike". Both pulled me out of the story. Also, I'm not a fan of the first person present tense. But the story was engaging, and I was interesting in seeing how Nym would escape her circumstances.

I have a lot of unanswered questions about the world, especially concerning the elementals and other magical beings. I never figured out whether each of the five kingdoms has a different type of magic or it's all a different type of the same magic with a different name. What was the real difference between Colin's earth magic and Nym's storm magic? Apparently Nym's was supposed to be stronger, but I only thought the difference was that they were from different kingdoms. Also, Eogan's blocking ability needed way more explaining. I also had some issues with the plotting. The court intrigue was not subtle enough. I feel like I got hit over the head with the court politics and was not given enough information about the magic world. Yet, the ending was quite surprising, and I even appreciated the cliffhanger.

Even with all the flaws, I was still entertained enough to want to read the next one. Storm Siren contains a good story, and I hope that I get more information and some strengthened characters next time.