Review: Burn For Me by Ilona Andrews 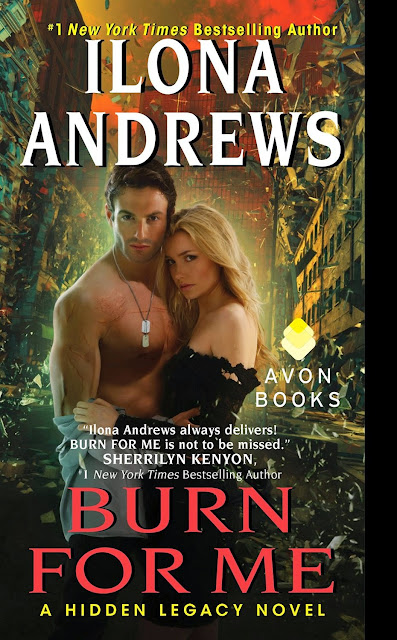 Nevada Baylor is faced with the most challenging case of her detective career—a suicide mission to bring in a suspect in a volatile case. Nevada isn’t sure she has the chops. Her quarry is a Prime, the highest rank of magic user, who can set anyone and anything on fire.

Then she’s kidnapped by Connor “Mad” Rogan—a darkly tempting billionaire with equally devastating powers. Torn between wanting to run or surrender to their overwhelming attraction, Nevada must join forces with Rogan to stay alive.

Rogan’s after the same target, so he needs Nevada. But she’s getting under his skin, making him care about someone other than himself for a change. And, as Rogan has learned, love can be as perilous as death, especially in the magic world.

Burn For Me is the first book in a new series by one of my favorite writing duos, Ilona Andrews. I'll warn you now, I'm a total fangirl, but I'll try to be at least a little objective.

First, Burn For Me is more Paranormal Romance than Urban Fantasy. I say this because the romance takes more of a front and center aspect. However, Ilona Andrews is perfect at the slow-burn, and I have a feeling that this series is going to be just that. While there is some kissing and a few hot and heavy scenes, nothing culminates so to speak. I like the slow burn, so this works for me, but if you want a HEA in one book, it's not going to happen. But the journey will be glorious. :)

The trademark Andrews snark and wit is present. This feels like a Ilona Andrews book, but isn't just a clone of one of their other series. The Paranormal Romance aspects helps to set it apart, but the main world and characters are also different than their other series.

Each of the worlds that the writing team has created so far is an alternate reality of our current world, and the world in Burn For Me is no different. The world is pretty much exactly like ours in that there are tablets and Audis and high-tech gadgets, but it's not because there is magic and that has created some snafus. In the 1800s, scientists created a serum that boosted and/or gifted magical powers. When the world realized that humans probably shouldn't have that much power, the serum stopped being administered. But what was done was done. Fast forward 150 or so years later and some wars and skirmishes and the magically powerfully have stabilized into Houses. Each House is immensely powerful and rich.

Nevada Baylor is not part of a House, but does have a power. She can tell when people are lying, and she is the owner of a private investigation business. Her newest case is a suicide mission and she is charged with bringing in a Prime (pretty much the highest level of magic user) with the power to incinerate anything and everything bent on trying to destroy Houston, Adam Pierce. She is kidnapped by another Prime (Mad Rogan) who is also hunting Adam and who is incredibly dangerous in his own right. But she realizes that he might be her only hope in capturing Adam while staying alive.

Nevada and her quirky family were awesome. Her grandmother works on armored vehicles; her mother is a former sniper out of the military; and her cousin is a cyber-geek. I was cracking up over Nevada's grandmother - she kind of reminded Gradma Mazur from the Stephanie Plum series. There is a great bond between the family members, but there is also normal sibling bickering and parental hovering that makes the family believable and real.

I loved Nevada. She's not perfect but she's practical and intelligent. She isn't a Prime but she knows how to use what power she has, and because her mother was a sniper, she can protect herself.

Mad Rogan makes for an interesting hero, as he is of the tortured variety. He shows a few redeeming qualities other than just being mouth watering hot, so I'm interesting in seeing how Ilona Andrews writes him. Will he turn out to be a good guy? Do we just not understand the soft guy under the bad guy? Is he really just a hot psychopath with a load of money? I could see why Nevada was interested, and it was easy to see why she wasn't falling over her feet to be with him at the same time.

If you're already a fan of Ilona Andrews and don't mind Paranormal Romance, you'll be sure to enjoy Burn For Me. If you haven't enjoyed Andrews in the past because the world is a little too much, you might enjoy this series instead. If you haven't tried anything by Andrews and you like Paranormal Romance (seriously, what are you waiting for?), this is probably a good place to start.