Waiting on Wednesday (76): Court of Fives by Kate Elliott 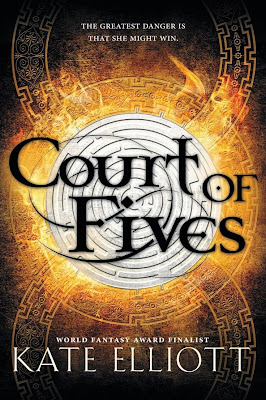 A teenage girl secretly competes in her city's prestigious athletic competitions in this high-fantasy adventure that can be pitched as Game of Thrones meets The Hunger Games meets Little Women.

In this imaginative escape into an enthralling new world, World Fantasy Award finalist Kate Elliott's first young adult novel weaves an epic story of a girl struggling to do what she loves in a society suffocated by rules of class and privilege.

Jessamy's life is a balance between acting like an upper class Patron and dreaming of the freedom of the Commoners. But at night she can be whoever she wants when she sneaks out to train for The Fives, an intricate, multi-level athletic competition that offers a chance for glory to the kingdom's best competitors. Then Jes meets Kalliarkos, and an unlikely friendship between a girl of mixed race and a Patron boy causes heads to turn. When a scheming lord tears Jes's family apart, she'll have to test Kal's loyalty and risk the vengeance of a powerful clan to save her mother and sisters from certain death.

I have enjoyed Elliott's Spiritwalker trilogy, but I still need to read the last in the trilogy. Although I haven't read it, yet, I have also heard great things about Elliott's Crown of Stars series. So, of course, when I heard that she was writing a new YA series, I was excited. This just sounds like it's going to be amazing.