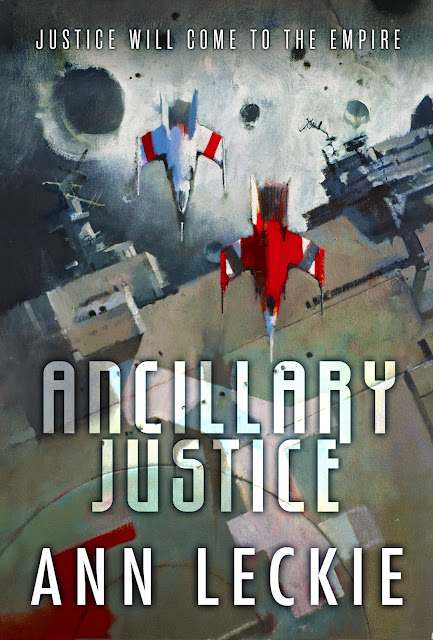 On a remote, icy planet, the soldier known as Breq is drawing closer to completing her quest.

Once, she was the Justice of Toren - a colossal starship with an artificial intelligence linking thousands of soldiers in the service of the Radch, the empire that conquered the galaxy.

Now, an act of treachery has ripped it all away, leaving her with one fragile human body, unanswered questions, and a burning desire for vengeance.

I picked up Ancillary Justice because it was science fiction written by a woman, and it had won tons of awards this year including both the Nebula and Hugo awards. I don’t normally read science fiction, I'm more of a fantasy with dragons kind of girl, but I had to see what all the talk concerning the space opera trilogy was all about.

Leckie did a really fantastic job of showing the reader about the artificial intelligence system that were the ancillaries, and how the ships were all one person, but multiple people at the same time. Ancillaries were once humans but were all connected to one ship. (I'm not really doing the description justice). She also showed us the difference between the ship Justice of Toren, the ancillary One Esk, and the person Breq, and how all at the same time they were once all the same and all different. It was strange and awesome, especially since it is all told from the first person perspective so "I" might mean the ship and/or Breq.

Leckie wrote a really complex system of languages, peoples, races and ideologies, not to mention an incredibly complicated plot. Breq is on a mission after most of the rest of her is destroyed (the Justice of Toren and all its ancillaries are destroyed) for vengeance. The reasons for that mission and the reasons for the Justice of Toren destruction are revealed piece by piece, and come together at the end of the novel.

I was really surprised when I got to the end of Ancillary Justice to discover that this is Leckie's first novel (although she had written some short stories prior), because it didn't read like a first novel, especially not a first science fiction novel. Although the culture, peoples, technology, etc. are complex and vast, they are also imaginative and fresh. Even when I was confused, I just wanted to know more, and Leckie provided that information eventually.

I also liked that Leckie's system was mostly gender neutral, or at least Breq was. The main gender pronoun used was "she" rather than English's neutral "man" for human. There were a few times when I was confused because someone else called someone a male, that Breq had termed a female, but otherwise, there was no real distinction between the genders. Anyone could hold any position, etc. although there was some class and race distinctions.

Ancillary Justice is the first in a planned trilogy, and the sequel, Ancillary Sword was released in October 2014. I would recommend this new trilogy to anyone interested in imaginative science fiction, especially set in outer space, but with a lot of focus on character development rather than space system development.

You can read an excerpt on Orbit's site here.