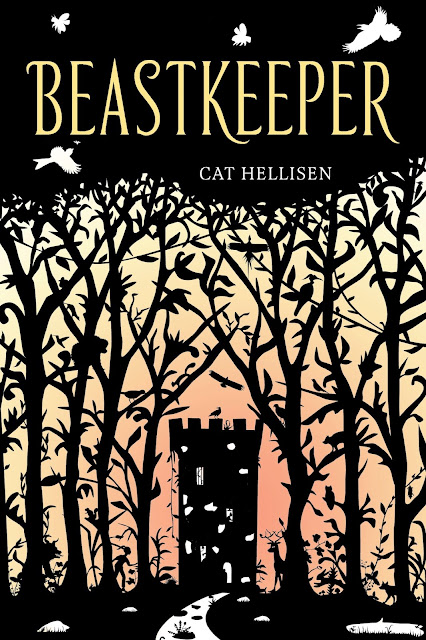 Sarah has always been on the move. Her mother hates the cold, so every few months her parents pack their bags and drag her off after the sun. She’s grown up lonely and longing for magic. She doesn’t know that it’s magic her parents are running from.

When Sarah’s mother walks out on their family, all the strange old magic they have tried to hide from comes rising into their mundane world. Her father begins to change into something wild and beastly, but before his transformation is complete, he takes Sarah to her grandparents—people she has never met, didn’t even know were still alive.

Deep in the forest, in a crumbling ruin of a castle, Sarah begins to untangle the layers of curses affecting her family bloodlines, until she discovers that the curse has carried over to her, too. The day she falls in love for the first time, Sarah will transform into a beast . . . unless she can figure out a way to break the curse forever.

I wanted to read Beastkeeper because it seemed like Beauty and the Beast except the girl is the beast. I loved the cover, too, and it makes a lot more sense now that I've read the book.

It seemed more like a middle grade novel than an older YA novel, not in the way it was written, but because the thoughts and actions of the main character were that of someone who wasn't yet a teenager. The writing, however, was beautiful and more mature than middle grade fiction.

I really liked the two messages of the book: that revenge is not always the answer and that sometimes the ending is unhappily ever after. Two families who are at war with one another would never stop being at war, or try to break their curses, because they were so desperate for revenge. It was kind of like the old saying that if everything was eye for an eye, then the whole world would be blind.

Hellisen gives the readers details little by little, but uses sources that may or not be reliable. All of the players that were telling Sarah about the curses, the events that led up to the curses, and how to break the curses had their own agendas. Also, some of the characters may have thought they knew the truth or thought they were telling the truth, when they did not or were not. There are always more than one side to every story, especially when there are curses involved. So, Sarah and the reader never knows what is true or real. This just adds to the creepy fairy tale quality.

While Beastkeeper was a great fairy tale, there were problems with the execution. There were some details which could have been explained better or were contradictory. After the catalyst for the curse, Sarah changes almost immediately while her dad changes gradually over a few weeks or months, which doesn't really make sense.

I also did not like the love story/romance aspect. It was creepy and not a good creepy. For the love story to be believable, Sarah should have been older. I just don't think that a 12 year old knows what romantic love entails, but may have been capable of infatuation. Also, the love interest could have been any age, including thousands of years old, so that added to the creepiness.

Beastkeeper was a good middle grade fairy tale, although not without its problems, and some parts may have been a little age inappropriate. Although, with Sarah's age and some of the missing/confused details, it's hard to say that this would be an older YA or adult novel. Regardless of its classification, Beastkeeper was an entertaining and well-written read. I'll definitely be checking out another of Hellisen's books, especially if it is a retelling of a fairy tale.

To satisfy FTC guidelines, I am disclosing that I each received a copy of the novel from the publisher in exchange for an unbiased review.