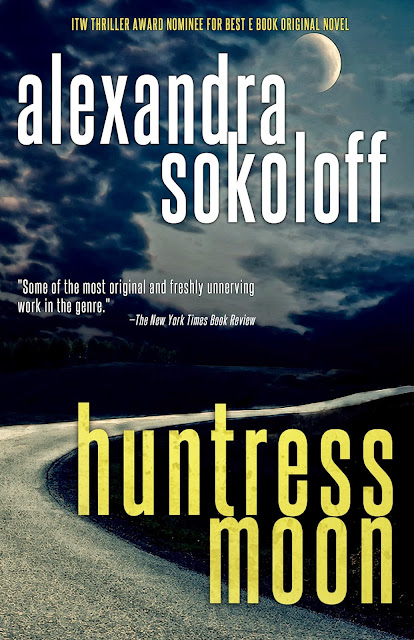 FBI Special Agent Matthew Roarke is closing in on a bust of a major criminal organization in San Francisco when he witnesses an undercover member of his team killed right in front of him on a busy street, an accident Roarke can’t believe is coincidental. His suspicions put him on the trail of a mysterious young woman who appears to have been present at each scene of a years-long string of “accidents” and murders, and who may well be that most rare of killers: a female serial.

Roarke’s hunt for her takes him across three states...while in a small coastal town, a young father and his five-year old son, both wounded from a recent divorce, encounter a lost and compelling young woman on the beach and strike up an unlikely friendship without realizing how deadly she may be.

As Roarke uncovers the shocking truth of her background, he realizes she is on a mission of her own, and must race to capture her before more blood is shed.

Huntress Moon and Blood Moon are part of today's Kindle Daily Deal on Amazon. Today only, each is only $1.99.

I think there's a general rule regarding reading/movies/media consumption tastes and professions: lawyers and cops can't watch legal shows and doctors don't watch medical dramas. So, one of the main reasons I like urban fantasy so much is that they combine police procedurals with paranormal for a mix that is so unbelievable, it works for me. However, when Alexandra Sokoloff approached the blog about reviewing Huntress Moon, I actually jumped at the chance.

One of the best parts of Huntress Moon is how much research it is readily apparent Sokoloff put into writing the novel. Not just into serial killers, but the human psyche in general, so Roarke's former path as an FBI profiler seems completely believable. It was also interesting to see the theories behind the lack of women serial killers: is it an inherent trait in women? Have victims been blamed on men but in reality were the result of women?

I also loved that Sokoloff created a lot of moral ambiguities and grey areas in Huntress Moon. As the reader gets to know more about the killer, we learn that she's not just a psychopath/sociopath, she's a damaged woman killing "bad" men to stop them from doing more harm. I loved that the reader, and Roarke, are forced to consider the basic problem of vigilantes. The killer targets men who have done some major wrong, which she knows by "seeing" their darkness. Which brings up more questions: is her ability to "see" darkness something paranormal or the manifestation of a mental illness caused by some severe childhood trauma? Which in turn is one of the major problems of the vigilante. It's easier to accept her killing a child molester or a rapist, but what happens when she's killing men which the rest of society would not consider "bad"?

Huntress Moon isn't a true whodoneit, as we get the story partly from the killer's perspective. But, it is a mystery in getting to know the killer and her hunter. Why does she target these men? Can Roarke catch her before she kills again? Will Roarke's team think he's crazy or believe a woman serial killer is possible?

I only had two issues with Huntress Moon, and they were my personal issues rather than any actual problem with the book. Roarke's obsession with the killer made me uncomfortable. I just didn't like the almost sexual way he became attached to her. Also, the possibility of a romance between a serial killer and her FBI hunter tips the scale for me into unbelievable. I also didn't like the ending. I assumed that the series would involve Roarke hunting down different serial killers in each book, when the trilogy actually focuses on Roarke and the killer from Huntress Moon entirely.

This was my first experience with R.C. Bray as a narrator, but I think he's the perfect crime thriller narrator. He added that little bit of extra chill, and I would definitely consider listening to another of his narrations, especially others in the same genre.

I would recommend this to anyone who likes a smartly written crime drama, but doesn't mind a possible touch of the paranormal. I'd even recommend it to the reluctant crime or thriller readers out there, like me.

To satisfy FTC guidelines, I am disclosing that I received an advance copy of the book for reviewing purposes from the author via Audible in exchange for an honest review. This has in no way affected the outcome of my review.