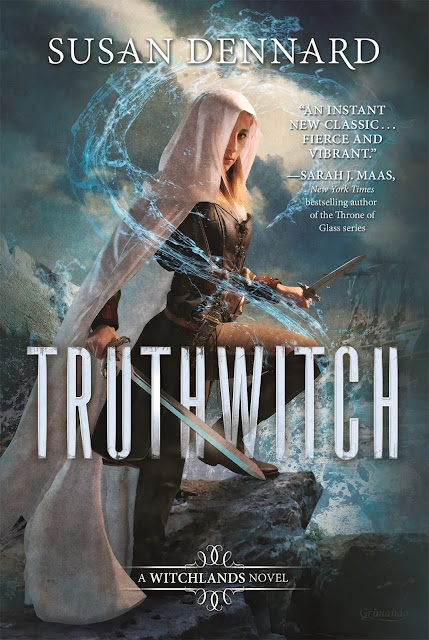 On a continent ruled by three empires, some are born with a “witchery”, a magical skill that sets them apart from others.

In the Witchlands, there are almost as many types of magic as there are ways to get in trouble—as two desperate young women know all too well.

Safiya is a Truthwitch, able to discern truth from lie. It’s a powerful magic that many would kill to have on their side, especially amongst the nobility to which Safi was born. So Safi must keep her gift hidden, lest she be used as a pawn in the struggle between empires.

Iseult, a Threadwitch, can see the invisible ties that bind and entangle the lives around her—but she cannot see the bonds that touch her own heart. Her unlikely friendship with Safi has taken her from life as an outcast into one of reckless adventure, where she is a cool, wary balance to Safi’s hotheaded impulsiveness.

Safi and Iseult just want to be free to live their own lives, but war is coming to the Witchlands. With the help of the cunning Prince Merik (a Windwitch and ship’s captain) and the hindrance of a Bloodwitch bent on revenge, the friends must fight emperors, princes, and mercenaries alike, who will stop at nothing to get their hands on a Truthwitch.

So, I didn't like Dennard's first series, Something Strange and Deadly, but that was probably only because it's about zombies, and there's a love story centering on a zombie. I can deal with killing zombies Resident Evil-style, but I just can't get on board with a zombie romance. Yuck.

But, then the cover released, and I'm totally judging and lusting about this cover. Then, my massive crush on Sarah J. Maas went into overdrive after we went to her author signing in NOLA. And, Maas and Dennard are best friends, and Maas kept talking about how cool Dennard is and how much she helped her when she was having trouble writing A Court of Roses and Thorns. And then, I signed up for Dennard's emails, and she IS a really awesome person. So pretty much, I have decided it's necessary that I love this book. Oh, and it's about witches....