Top Ten Tuesday: Books I Would Love to See as Movies/TV Shows

1. And the Mountains Echoed by Khaled Hosseini

I recently finished this book, and I was very taken with it. The story follows nine different people and shows how their lives intersect. Some people I’ve talked to who have read this book had a hard time following the stories, but if this was made into a movie, and if you could put a person to the names, it would make it much easier.

2. First Grave on the Right by Darynda Jones

I love this series! I will take a vacation day from work so I can read her books as soon as they come out. Charley is a Grim Reaper who helps people into the light. She also solves mysteries, is super funny and lusts after a hot man who may not be human.

Gin aka Spider is an assassin and has elemental powers of stone and ice. She gets into fights and kills people every book, while sussing out the big bad, and then kicking their butt at the end.

So Gretchen Lowell is a serial killer. Should I be concerned that two books in a row has a woman killing lots of people?!? Nah, they’re just both really good series. Gretchen caught Archie Sheridan, tortured him, let him go, and then turned herself in. Archie is a detective and the case he’s working on leads him back to Gretchen. These books suck you in, and it would cool to see what they could do as a TV series.

When I went to Kenner’s site to find the title of the first book in her Demon Hunting Soccer Mom series, I saw that Carpe Demon has been optioned into a series for the CW network... so maybe wishes do come true! This series is like Buffy, if she was married, had kids and fought demons instead of vampires, while trying to hide it from her friends and family.

More serial killers, this time clones of actual ones, like Jeffrey Dahmer and John Wayne Gacy. The premise behind this is the government cloned notorious murderers to use as bio-weapons to study them and learn about pure evil. Some of the kids are put into loving homes, while others are put into horrible living situations. When the most dangerous of them are set free, it’s up to a former Army Ranger to stop them. And if that’s not bad enough, the kids also have three canisters of a mysterious chemical weapon that could destroy a city. This book is just begging to be made into a movie!

In 2008 there was an animated movie, but it was not good. Dragonlance is a great fantasy story, with a strong set of female characters. The lines between right and wrong were very blurry, so it made it very engaging since the world isn’t black and white. Toss in dragons, quarreling gods and magic, and you have a great story. This would be perfect for a TV series.

8. The Dresden Files by Jim Butcher

They already made this into a TV series, and it was cancelled after one season. It has everything to do with how they put the series together and nothing to do with the books. One of the great things about The Dresden Files is that there’s no real status quo for the main character. Things change for him all the time, constantly upsetting the comfortable expectations that readers can develop in ongoing formulaic series where essentially the same thing happens in every book. Plus Harry Dresden is a wizard, and wizards are cool.

9. Strangers in Paradise by Terry Moore

This is a graphic novel, but would make a great TV series. Francine is innocent and looking for love in all the wrong places, while Katchoo has a dark, hidden past and is over love. It’s the relationship between Katchoo and Francine that drives this series, with the line between friendship and love constantly blurring. Around that, Katchoo’s past comes back and sucks both of them into chaotic and dangerous circumstances that open Francine’s eyes to how bad this world can be. 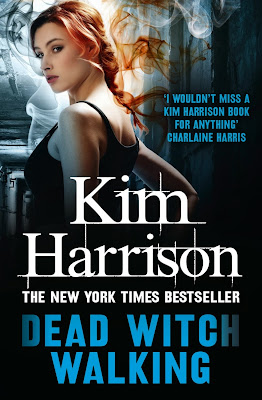 10. The Hollows by Kim Harrison

Out of all the supernatural people/creatures I read about, witches are my favorite because I know they are real. They may not have all the powers they do in books, but they are still very gifted. While this series about the witch, Rachel Morgan, recently ended, there are enough books in it to make for a long TV run. Once again, this is a series where the characters evolve, and choices are made that are in the grey area. It’s also about family, maybe not blood, but the ones you choose.

Which books would you love to see onscreen?