Today at Bibliophilia, Please, we have with us Kevin Krohn, author of Latter-Day of the Dead (you can read my review here). 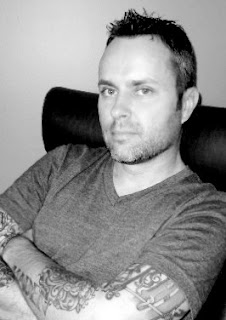 Kevin Krohn is the author of Latter-Day of the Dead and Severed Ties. He lives in Layton, Utah with his wife and two children. He likes the way The Sopranos ended.


First off, Kevin, I would like to thank you so much for giving me the opportunity to not only interview you, but review your book. I was immediately drawn to the premise of Latter-Day of the Dead – a zombie outbreak on a polygamist compound in Utah. Umm, yes please! What made you decide to go with that scenario?

When thinking about a zombie outbreak, or any catastrophic event for that matter, I began to think about the small sects of people across the country that have cut themselves off from the rest of the populace. They would really be the last to know of such a widespread problem, so I found that scenario exciting and interesting to write about. And when they do find out, would they even be able to comprehend the magnitude of an outbreak or know how to respond to such a situation? They literally wouldn’t know a zombie if it bit them in the shoulder. Literally. So I took that set-up and ran with it.

Usually, one of the main topics I avoid outside of an academic setting is religion. However, Mormonism plays a rather large role in this story. Is their history and doctrine something you are personally familiar with, or is it something that you had to research for the story?

I was vaguely familiar with the history before I moved to Utah three years ago. When I started living here I wanted to have a better understanding of the state’s history, and the religious connection plays a big part in that. Once I got going on the story I did a much deeper dive into researching specifics.

Did you try to visit any compounds or interview any polygamist families during your research? If so, how did they respond to your questions?

That would have been interesting, but I did not. They do not let extra males hang around…it kills the guy/girl ratio they are looking for.

Who was your favorite character to write in Latter-Day of the Dead?

I had a lot of fun with Kib. He was just one of the side characters, but I was able to utilize him for some slight comic relief during some pretty intense scenes. He was not the brightest person in the group, and I think his aloofness made him pretty endearing.

If I could choose two words to describe Elias’ (the protagonist) method of describing his situation and surroundings, it would be distinct and unique. Is it based on something you do yourself, or just a part of Elias that developed as you created him?

Haha, I definitely don’t speak like that. I think a lot of times a first-person narration is just utilized to give the play-by-play of the story, and an opportunity is missed to give the reader a sense of the main character’s personality. It was a repetitive piece I wanted to use to give the story some rhythm, and to hint at Elias having to constantly explain things in very basic terms for the less-educated group.

I know every author has a variety of literary writers or works that have had a major influence on them, even if it has nothing to do with his/her genre or writing style. Who or what are some of yours?

Chuck Palahniuk is the one who has had the biggest influence, because reading his books actually pushed me to want to get mine out there. Rant would probably be my favorite book of his.

Drive by James Sallis. Loved the movie, and the second book is coming out shortly so I decided I better jump to it.

If you could choose one book that everyone should read, which one would it be?

Max: The Dog that Refused to Die by Kyra Wayne. It will be mandatory reading for those of us that survive the zombie apocalypse. If Max endured his battle for survival, there will be hope for us all.

I have told quite a few people about your book since reading it, and they are hesitant because of the negative opinion so many have about self-published novels. What made you decide to publish independently?

I don’t want to get to a point where the fun of the writing process ever goes away. And to me the fun is getting to do this my way. I want to make the decisions, keep the book what it was intended to be, and try to keep this a passion without it ever becoming too much of a business. I want artistic decisions to be made throughout, not business decisions, and staying independent has allowed that to happen.

It’s weird that in the music scene, it is cool and even encouraged to search out and find these great independent artists. It is hip to discover unknown bands or great local artists, but for books there is a disconnect for some reason.

Independent books are the same as any major-company-backed books, movies, or music. There are some really cool ones, and some really bad ones. Latter-Day of the Dead falls into the “really cool” category, thankfully. You don’t need big budget backing to tell an entertaining story.

Do you have any upcoming projects that we can look forward to? More specifically – when is Latter-Day of the Dead’s sequel releasing?

I would like to get a quick turnaround on ‘LDotD: Book Two’ due to the great reception Book One is receiving, so I will be working to get that out as soon as possible. 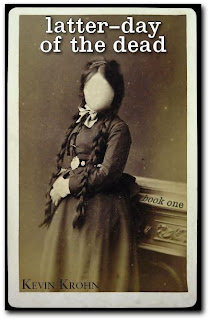 Latter-Day of the Dead can be found on its Facebook fan page or added to your TBR on Goodreads.
Available for purchase now on Amazon | Barnes and Noble
Since I enjoyed reading Latter-Day of the Dead so much, I will be giving away an Kindle digital copy to a lucky entrant. If you don't have a Kindle e-reader, you can always use the Kindle app in your web browser, PC, Mac, iPhone, iPad, Blackberry, and/or Android Phone. I'm sure it will download directly to your head in the next fifty years or so. Anywho - Rafflecopter time!
a Rafflecopter giveaway