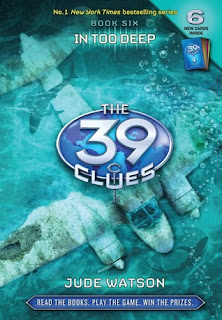 Title: In Too Deep (The 39 Clues, Book 6)
Author: Jude Watson
Publisher:  Scholastic
Release Date: November 3, 2009
In Too Deep is the sixth installment of The 39 Clues series and is written by Jude Watson, who also wrote the fourth book - Beyond the Grave. It begins with Dan and Amy Cahill after they wrap up their business in Russia in The Black Circle. The children travel to Australia, being as it is the last trip they knew their parents to take. Along with their au pair, Nellie Gomez, and Saladin the cat, they go Down Under to meet their father's cousin, Shep Trent.
As usual, their adventure is filled with danger and their opposing Cahill cousins - namely Irina Spasky, Natalie and Ian Kabra, and the newly arrived Isobel Kabra. (She is the mother of Natalie and Ian, as well as the co-leader of the Lucian branch along with her husband.) Amy has a major plot point in this book, due to Irina pushing her to remember the night of her parents' deaths. While she is trying to find answers, Amy also facing down Kabras, sharks, and flying Holts. Dan and Amy also discover that their beloved Nellie Gomez may not be who she says she is.
This book maintains the same level of excitement and adventure as the rest of the series. Each of the characters is becoming more developed, and despite the answers we get, we are left asking more questions. I do not want to spoil too much, but I had a nice long Ugly Cry at the end of the book. I also have a new person to add to my list of favorite literary characters. And, of course, I have already started The Viper's Nest.
Labels: 39 Clues, Audiobook, In Too Deep, Jude Watson, Kid Lit
Email ThisBlogThis!Share to TwitterShare to FacebookShare to Pinterest