Review: Latter-Day of the Dead by Kevin Krohn 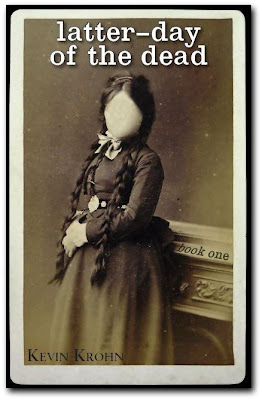 Latter-Day of the Dead is Kevin Krohn’s latest novel, which is the fictional first person account of a zombie outbreak on an isolated compound of radical Mormons. It is a thrilling horror novel that is aimed at a mature audience.

Elias is the doctor in Kanab, Utah, where his family and congregation resides. He is one of the few individuals that had been allowed to leave the compound for outside schooling, based on the needs of their secluded community. Despite his exposure to the outside world, it is not until Elias is denied what he wants most and his brethren become violently (literally) ill that he begins to question what he has always taken on faith.

While reading the book, the main thing that stood out to me is the impartial description of polygamy and Mormon history. Neither are slammed, just described in a manner that is unbiased and obviously researched. The unfortunate result of living in a closed community – inbreeding – is even handled in a dignified manner. None of the villagers are slobbering idiots; they are just slow, and there is a particular genetic disorder that is prevalent in the compound. Krohn did not even use the stereotype of the evil polygamist as a crutch to find a villain – that individual earned my disdain on his own. I had to point all of this out first because in order for me to truly enjoy a book, I want to appreciate what the author does around the story itself.

As for the story, I enjoyed it thoroughly. It was more thriller than horror, and there weren’t any parts that I found myself disgusted enough to skim. (This is what I do in Stephen King’s gorier works.) Yes, there is the typical zombie bloodshed, but it is not gratuitous and helps move the plot along. The only problem that I had with the book is that it ended rather abruptly. It is short enough that I could almost classify it as a novella, so the sequel that is sure to come could have been added to make one larger novel. Plus, I wouldn’t have to wait find out what happens after the cliffhanger ending.

I’m glad that I did not hesitate in accepting this independently published novel. It was well-written, well-edited, and just as good as anything put out by the major publishing houses. It was a quick, fun read, and I will happily recommend it to anyone who enjoys zombie books or even horror in general.


Available now on Amazon | Barnes and Noble
Be sure to add it to your TBR on Goodreads!
Be sure to come back by Bibliophilia, Please for my interview with the author, Kevin Krohn and a giveaway of the book!
*To satisfy FTC guidelines, I am disclosing that I received the book for free from the author in exchange for an honest review. It has in no way affected the outcome.
Labels: Horror, Kevin Krohn, Latter-Day of the Dead, Mature, Thriller, Zombies
Email ThisBlogThis!Share to TwitterShare to FacebookShare to Pinterest