Review: The Book of Lost Fragrances By MJ Rose 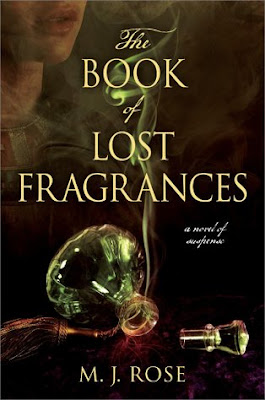 The Book of Lost Fragrances is the latest release in M. J. Rose's long, successful career, and the fourth installment in her Reincarnationist series. It is full of intrigue, mystery, a race for a historical artifact, family, and timeless romance. Although it is a part of a series, the book is a standalone novel.

The story contains a host of minor characters from ancient Egypt, 18th century France, and modern day, but focuses mostly on Jacinthe L'Etoile and, to an extent, Xie Ping. Xie is an artist living in China who has a secret, and is trying to survive under the watchful eye and heavy hand of the Chinese government. Jac is a mythologist television personality whose family perfume business is on the verge of collapse. When her father's declining mental facilities forces him to retire and her brother goes missing, Jac's life begins to spin out of control. She only has days to find her brother and his mysterious, ancient Egyptian pottery shards that hold the potential to save the family business from financial ruin. Xie and Jac are on opposite sides of the world, but are thrust into the midst of intrigue, murder, and the age-old question of whether or not the possibility of reincarnation truly exists.

I found The Book of Lost Fragrances to be a beautiful and well-written novel. The story flowed seamlessly across time and continents to tell a story of the search for the scent of memory. I was never bored by the flashbacks of the past or by the steady change in character focus. I would be reading what is going on in modern day Paris, then suddenly find the book describing events in ancient Egypt. The only problem that I had with the book was something that slightly offended my old-fashioned sensibilities. It was not a huge deal, but it made me a bit uncomfortable. However, it served a purpose at the end of the novel. The ending would not have been as powerful if not for that particular plot point.

As I stated in my summary, the book contains a multitude of characters. I think in this instance they were beneficial to the pacing and wove the story together more completely. Each was necessary to develop a major character or better explain a scene. Jac may have been the diamond, but she would not have shown without the never-seen little girl, Elsie. The assassin for the Chinese mafia added another dimension to Xie, in my opinion. The relationships between the characters were also stunningly lovely threads that wove this engrossing story together. To say more than that could potentially ruin the surprise of how everything was tied.

In the end, The Book of Lost Fragrances is a story about love. It is about the love between strangers, the love between family, and that intense love of a sweetheart (for lack of a better word). Anyone who enjoys a love story without a lot of romantic elements, a murder mystery without the gore, and a treasure hunt without an insane amount of twists and turns will enjoy this book. I am thrilled that I had the opportunity to review it, and I look forward to starting the series at the beginning. This is a book that I will definitely read again.


Available for purchase - Amazon | Barnes & Noble
Be sure to add it to your TBR list on Goodreads!

To satisfy FTC guidelines, I am disclosing that I received this book for free from the publisher in exchange for an honest review. It has in no way affected the outcome.
Labels: Atria Books, historical fiction, MJ Rose, Mystery, The Book of Lost Fragrances
Email ThisBlogThis!Share to TwitterShare to FacebookShare to Pinterest