Amy is fine living in the shadows of beautiful Lila and uber-cool Cassie, because at least she’s somewhat beautiful and uber-cool by association. But when their dates stand them up for prom, and the girls take matters into their own hands—earning them a night in jail outfitted in satin, stilettos, and Spanx—Amy discovers even a prom spent in handcuffs might be better than the humiliating “rehabilitation techniques” now filling up her summer. Worse, with Lila and Cassie parentally banned, Amy feels like she has nothing—like she is nothing.

Navigating unlikely alliances with her new coworker, two very different boys, and possibly even her parents, Amy struggles to decide if it’s worth being a best friend when it makes you a public enemy. Bringing readers along on an often hilarious and heartwarming journey, Amy finds that maybe getting a life only happens once you think your life is over.


And without further ado - 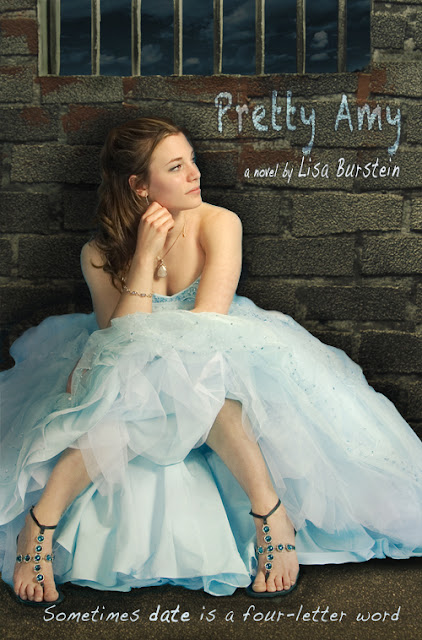 I was just about to put out my cigarette and go back inside when I heard a skateboard coming down the street. It sounded like waves, like a conch shell against your ear. That full, empty sound.

Maybe it was Aaron. I conjured up my stupid daydream, the one I used to fill my head when I couldn’t deal with any of the other stuff in there—that he would find me, that he would apologize, that he would tell me that prom night hadn’t been his fault.

The difference this time was that when I looked toward the sound, he really was there.

He was skateboarding down the sidewalk like it was made of water, wearing the same loose, worn jeans from his Facebook picture. He carried a backpack, like he might have been coming from the library, but I doubted he ever went to the library.

I lit another cigarette with the end of my last one; any excuse to stay put. Then I remembered I was wearing a suit.

“You got another one of those?” he asked. His eyes were blue. I hadn’t noticed that in his picture.

My hands shook as I gave him a cigarette. He brought a silver-and-black Zippo to his mouth, flipped it open with one hand, lit his cigarette, and slapped it shut. The whole thing took seconds, but it felt like he was doing it in slow motion. “Thanks,” he said.

Maybe he had just stopped to get a cigarette. Maybe it had nothing to do with me.

It probably had nothing to do with me.

I couldn’t tell him. Telling him that he’d stood me up for my own prom would have been way too embarrassing. It would tell him that I still cared enough to remember.

“I’m friends with Lila and Cassie,” I said, wishing that my hair wasn’t pulled back in a headband like I was a nun.

“What are you all dressed up for?” he asked.

Of course he didn’t know me. If he had, he would have known that I’d just come from court and that I was trying to do everything I could to forget it.

“I work here,” I said, thinking fast. “I’m supposed to be a librarian.”

“Amy,” I said, waving hello with the cigarette in my hand.

He smiled. “Though you do make a cute librarian.”

I looked at his skateboard. “You wanna try it out?” he asked.

The deck had a mural of blue sky and white-capped mountains hand-painted on it. The wheels were covered with stop-motion birds, so that when they spun it must have looked like the birds were flying.
There was more to this boy. More that I wanted to know.

“I guess I could,” I said, but then I remembered my mother. She would come looking for me soon.

“Not that I’m allowed to use anymore.”

“Parents,” he said. He pulled a sketchbook from his backpack. Maybe he had painted that beautiful mural. He ripped out a piece of paper, wrote something down, and handed it to me.

It was his phone number.

I tried not to act surprised, tried to act like boys gave me their numbers all the time, especially when I hadn’t asked for them.

“See you around, Amy,” he said. He dropped the skateboard next to him. It landed perfectly on its wheels like a cat would on its legs.

As he skated away, I looked at his number; the paper was as soft as fabric. I folded it smaller and smaller and hid it in my bra. Maybe he hadn’t said what I wanted him to say, but he had found me.

He had found me. 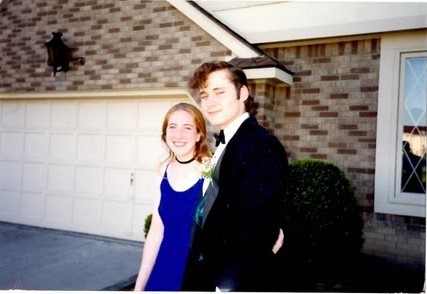 Lisa Burstein's Junior High Prom Photo
Lisa Burstein and Entangled Publishing will be hosting a Worst Prom Photo contest in the weeks leading up to AMY's release on May 15. So make sure to dust off your old prom photos—the more tulle, bows, and big hair the better!—and watch Lisa's site, http://www.lisaburstein.com, for details on how to submit/enter to win a beauty package.