As a part of Monica Leonelle's Socialpunk blog tour, I have a quick interview with the author for your enjoyment.

Ima would give anything to escape The Dome and learn what’s beyond its barriers, but the Chicago government has kept all its citizens on lockdown ever since the Scorched Years left most of the world a desert wasteland. When a mysterious group of hooded figures enters the city unexpectedly, Ima uncovers a plot to destroy The Dome and is given the choice between escaping to a new, dangerous city or staying behind and fighting a battle she can never win.

What inspired you to write Socialpunk?


I was inspired by the city of Chicago, by social media issues in our current world, and by the cyberpunk genre. The book is a bit like the Terminator series and I reference that a couple times just for fun. James Cameron is basically my favorite director ever, and he really inspires me with his world-building and storytelling skills.


The Chronicles of Narnia influenced me quite a bit as a kid. They inspired my first series, the Seven Halos series. Silver Smoke is available now.

Why do you think there has been a sudden surge in dystopian and post-apocalyptic novels?


Probably The Hunger Games trilogy! People must be tired of vampires.

It is always interesting to hear why independent authors have chosen the route that they have. What made you decide to go “indie”?

I'm an entrepreneur and a business woman. I'm more than just a writer, and I like having control over the entire business.

You’ve been doing a great job marketing your book. However, if Twitter, Facebook, the blogosphere, etc. disappeared tomorrow (social networking apocalypse!), how would you get people to read your book?

I guess I'd have to go door to door or start selling to bookstores. I'd do a lot of in-person networking.

What projects are you currently working on? Can you tell us a little bit about them?


I'm finishing up the second book in my Seven Halos series, called Tin Soldier. That series is about archangels and archdemons and very pretty girl who is caught in the middle of their war. That series unfolds really slowly, so if you like deep worlds with lots of mythology and history, you might enjoy that book.


I'm probably moving into serialized fiction next, just because of my work schedule. I'm working on developing two different ideas at the moment—one, kind of like Game of Thrones meets Waterworld. The other is about superheros in the 1920s. These are super generic descriptions at the time, but that's all I have so far! Either way, I'm going to keep experimenting with new ideas. I'll probably never really leave YA.

Okay, your dog is way too cute to not bring up. Can you tell us a little bit about him/her?


Aww, little Mia is the most adorable westie on the planet! She has a great personality and tends to grab a lot of attention. She's very high energy and I've had her since she was about eight weeks old.

As a part of the Socialpunk blog tour, Monica has a bit of a giveaway for the readers.
a Rafflecopter giveaway 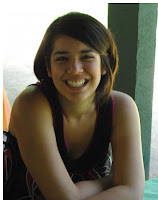 Monica Leonelle is a well-known digital media strategist and the author of three novels. She blogs at Prose on Fire and shares her writing and social media knowledge with other bloggers and authors through her Free Writer Toolkit.
Labels: Author Interview, Dystopia, Monica Leonelle, Post-Apocalyptic, Socialpunk, Young Adult
Email ThisBlogThis!Share to TwitterShare to FacebookShare to Pinterest