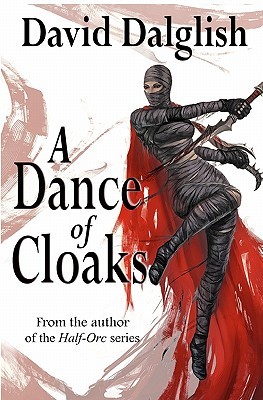 Thren Felhorn is the greatest assassin of his time. Marshalling the guilds under his control, he declares war against an allegiance of powerful nobles. His son, Aaron, has been groomed since birth to be his heir. Sent to kill the daughter of a priest, Aaron instead risks his own life to protect her from the wrath of his guild. In doing so, he glimpses a world beyond the iron control of his father. (Goodreads summary)

Welcome to the dark world of a young man by the name of Aaron. From a child he is raised and taught to cling only to hatred and obedience. He strives to please his father that would have him become the perfect killer, one that feels no regret and holds no emotions.

Growing up in the slums of Veldaren, Aaron is the son of the notorious Thern Felhorn, leader of the Spiders Guild. Together with Thern, the guild wages a never ending war between the other guilds and the all-powerful Trifect, three ruling families. Striving to completely take over and control the city, Thern seeks to creature the ultimate killing machine or, as he prefers to think of it, his perfect heir. To do so, he hides everything good from his son. Forced to learn lessons from the harshest of master, Aaron endures all number of torments until he meets the young lady Delysia. Delysia is the priestess of Ashhur and, to Aaron, she represents everything in the world once denied to him. Ordered to kill her, Aaron comes face to face with the hardest decision of his young life: kill the girl that could change everything, or kill the dream of his father.

I found A Dance of Cloaks to be a true look into the dark nature of fantasy. Assassins walk the streets in daylight and evil does not hide its face as so many often believe it does. David Dalglish provides clear details in the emotionally thin lines that separate the killer from the protector and the good from the evil. His novel continues to explore the deeper nature of relationships has he shows what can occur when you starve someone of all forms of love. In short, this novel is a highly detailed and fascinating read for any that is searching for a darker look at life.

Read the dark fantasy, Cloak of Shadows, by David Dalglish to find out what becomes of Haern/Aaron as he struggles to determine what his life truly means.


Buy your copy here: Amazon | Barnes & Noble | Smashwords
Don't forget to add A Dance of Cloaks to your TBR list on Goodreads!

Bookboy is my much and ever-suffering assistant. After months of my constant nagging, he finally wrote a review for you guys. Show him some love, and he might just stick around.
Labels: A Dance of Cloaks, Bookboy Review, Dark Fantasy, David Dalglish, Fantasy
Email ThisBlogThis!Share to TwitterShare to FacebookShare to Pinterest