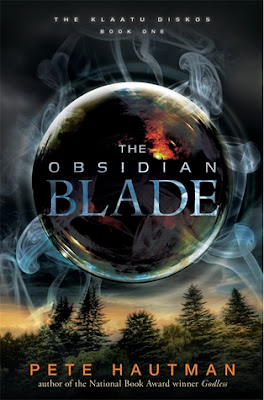 The Obsidian Blade is a science fiction novel by the 2004 winner of the National Book Award for Young People's Literature, Pete Hautman. It is the first book in the Klaatu Diskos trilogy and is aimed at a young adult audience.

Tucker Feye enjoys his small town life with his reverend father, organ-playing mother, and two best friends in Hopewell, Minnesota. However, after Tucker knocks a shingle off the roof of the family home and his father disappears into thin air, he finds his life changing abruptly. His father returns with the mysterious girl, Lahlia, and a strange cat, but without his previously unshakable faith in God. In the days that follow, Tucker's mother slowly descends into madness. One day, Tucker returns home to find that both of his parents have inexplicably disappeared, and his long-lost uncle has come at the behest of Reverend Adrian Feye to care for him. With his life in upheaval, Tucker is inspired to begin experimenting with the disks and begins a series of events that could very well change the fabric of time itself.

The premise of The Obsidian Blade is something completely different from anything that I have read in the past. It was an imaginative take on time travel - disks built (or commissioned, rather) by a technologically and intellectually superior race. The disks are placed at the time and locations of events which are "the terrible, the horrific, the irreversible", such as the Martian biocide, the outbreak of Bubonic plague in France, and a death of a certain prophet. However, the brilliant uniqueness of the book is ultimately its downfall for me. Most of the time, I did not understand why characters were behaving the way they did. I never figured out the purpose of various events. I have no problem with accepting science fiction at face value, but I felt like I was blind-folded on a roller coaster ride. Do not let that dissuade you from reading the book - I still could not put the book down. Also, it may not be the best novel for a younger teenager due to some of the graphic brutality in some scenes, but it is nothing that would stop me from recommending this book to young adult readers.

The Obsidian Blade is violent, imaginative, and ultimately confusing, but it was a quick read that I enjoyed.

Buy your copy here: Amazon | Barnes & Noble
Be sure to add it to your TBR List on Goodreads


To satisfy FTC guidelines, I am disclosing that I received this book for free from the publisher in exchange for an honest review. It has in no way affected the outcome.
Labels: Pete Hautman, Review, The Obsidian Blade
Email ThisBlogThis!Share to TwitterShare to FacebookShare to Pinterest