N is for Non-Fiction

When I am not poor or horribly frustrated from Epic Computer Shenanigans*, I am working my history degree. I have been going to college off and on for more years than some people in the young adult audience have been alive**, but I'm finally at the point in this degree process where all I do is read a crapload of historical texts and write write write write write write write write write. When I tell you that I love science fiction/fantasy and secretly adore "literature", it has nothing on the excitement that I get from digging through archives, special collections, and long-winded descriptions of historical thingamajiggers. While I know there is more to non-fiction than these history books (I'm only using the word lightly for one of these), but this is what I read and know. And love. 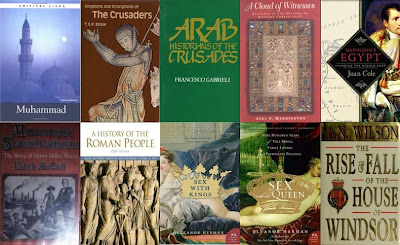 Muhammad by Yahiya Emerick
Kingdoms and Strongholds of the Crusaders by T.S.E. Boase
Arab Historians of the Crusades by Francesco Gabrieli
A Cloud of Witnesses by Joel F. Harrington
Napoleon's Egypt: Invading the Middle East by Juan Cole
Mississippi Steamboatman: The Story of Henry Miller Shreve by Edith M. McCall
A History of the Roman People by Allen M. Ward, Fritz M. Heichelheim, & Cedric A. Yao
Sex with Kings by Eleanor Herman
Sex with the Queen by Eleanor Herman
The Rise & Fall of the House of Windsor by A.N. Wilson

I suppose I can give you a quick explanation of my selection. Each of those books have been used for research purposes, and some of them I have even reviewed academically. My historical studies had been religious in nature, with a focus on Muslim-Christian relations. I acquired a love of Napoleon after having a professor whose obsession was contagious. I grew up in the Shreveport area, so I thought it would be easy to study Captain Shreve (not easy at all, but still fulfilling). Romans were fascinating, strange creatures. Finally, I love most things monarchy, and I would highly recommend the Eleanor Herman books to anyone. They are not trashy or risque in the slightest. The last book was an engrossing read - we'll leave it at that.

* I lost over one hundred pages of research, including sixty-ish pages of finished portions of research papers. Months of work - I don't want to talk about it.


My A to Z Master List
Labels: A to Z Challenge, Blogging from A to Z, Non-Fiction
Email ThisBlogThis!Share to TwitterShare to FacebookShare to Pinterest