J is for Juvenile

I have found that there are two kinds of voracious readers - those who read from childhood on and those who read after finding a special book once they get a little older. (Don't shoot holes in this today - just roll with it.) I know if I've said it once, I've said it a thousand times, that I began reading when I was little. Instead of me going crazy and writing a novel-length post about great juvenile literature (I could very easily), I will list a FEW that were my favorites* as a child. Yes, I know I am leaving great ones out. It is going to hurt me to do it, but these are the ones that I found myself reading over. And over. And over. Also, the ones that I've listed which are the first in a series represent the entire series. 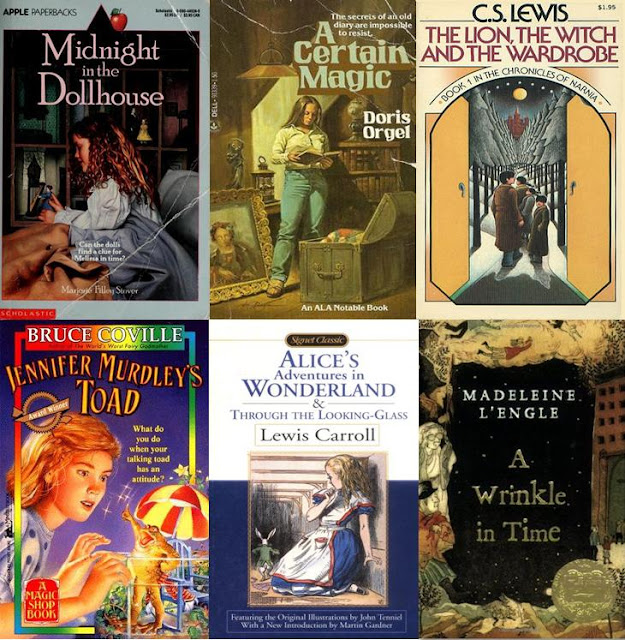 I am perfectly aware what a strange mixture it is that you see, but this is what I read and reread that qualifies as juvenile. (Click on the titles to find out more about them.)

Midnight in the Dollhouse by Marjorie Filley Stover
A Certain Magic by Doris Orgel
The Lion, the Witch, and the Wardrobe by C. S. Lewis
Jennifer Murdley's Toad by Bruce Coville
Alice's Adventures in Wonderland by Lewis Carroll
A Wrinkle in Time by Madeleine L'Engle

You can fill in your favorites in the comments. It will help us both cope with this short post. I am also trying to play catch-up on returning visits and comments. I was out of town over the weekend, so I'm a little (okay, a lot) behind on All The Things. :-)


*I began reading adult level literature when I was seven or eight, so most juvenile fiction that I have read was as an adult. Yes, I know that is odd. Blame Piers Anthony.


My A to Z Master List
Labels: A to Z Challenge, Blogging from A to Z, Favorite, juvenile fiction
Email ThisBlogThis!Share to TwitterShare to FacebookShare to Pinterest