Release Day Blitz: The Weight of a Wing by Ioana Visan #Giveaway 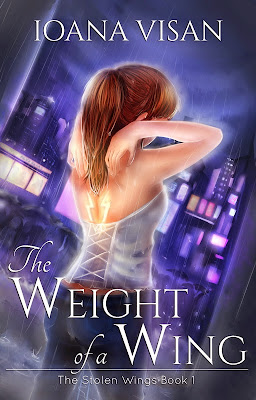 Alise has achieved the impossible. After her wings were chopped off, the fairy survived and now finds herself in the human world, once again hunted like prey by the sadistic Gorem.

Locating him with her help means that the two Guardians of Balance, Rafe and Vale, will not only be able to turn him in and make him pay for maiming her, but make him accountable for the deaths of other fairies as well.

Gorem has plans of his own for the rogue fairy. With the help of a wizard, Fabian, and an army of monsters by his side, Gorem will stop at nothing to recapture Alise.

With already so much on the line, Alise not only has to keep herself safe from harm, but will also have to protect her new human friend, Cassie, in the process.

Who will win the battle of good versus evil? Is capturing Gorem worth risking what remains of Alise's life?

Award-winning writer Ioana Visan has always dreamed about reaching the stars, but since she can't, she writes about it.

After fighting the apocalypse aftermath in Human Instincts, she played with shapeshifters in Blue Moon Café Series: Where Shifters Meet for Drinks, she dealt with vampires in The Impaler Legacy series, and then she designed prosthetics in Broken People before tackling longer works like a fantasy trilogy and a science fiction series.

Aside from publishing short stories in various Romanian magazines and anthologies, she published a Romanian short story collection Efectul de nautil and the Romanian edition of Human Instincts.

She received the Encouragement Award from The European Science Fiction Society at Eurocon 2013.

Join Ioana on facebook for the book release party of The Weight of a Wing. There will be talk about books, Q&A, giveaways, and lots of fun. Join a wingless fairy in her quest for justice!


Enter to win 1 of 5 copies of The Weight of a Wing by Ioana Visan!
a Rafflecopter giveaway