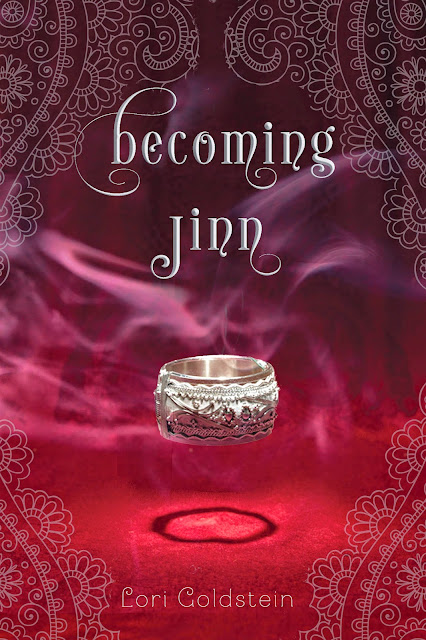 Forget everything you thought you knew about genies!

Azra has just turned sixteen, and overnight her body lengthens, her olive skin deepens, and her eyes glisten gold thanks to the brand-new silver bangle that locks around her wrist. As she always knew it would, her Jinn ancestry brings not just magical powers but the reality of a life of servitude, as her wish granting is controlled by a remote ruling class of Jinn known as the Afrit.

To the humans she lives among, she’s just the girl working at the snack bar at the beach, navigating the fryer and her first crush. But behind closed doors, she’s learning how to harness her powers and fulfill the obligations of her destiny.

Mentored by her mother and her Zar “sisters”, Azra discovers she may not be quite like the rest of her circle of female Jinn . . . and that her powers could endanger them all. As Azra uncovers the darker world of becoming Jinn, she realizes when genies and wishes are involved, there’s always a trick.

Once a Jinn becomes 16, she gets a bracelet which activates her powers and also allows her to grant one wish to each human. The wish granting and the Jinn world are ruled by the Afrit, and Azra believes that they are unfair jailers.

Azra is struggling with becoming a Jinn because she only sees the negative and feels like it equals a lifetime of slavery. She doesn't understand why the male Jinn are not allowed to travel to Earth. I really liked Azra, but I also empathized with her. I can see that she could be incredibly frustrating for other readers. I understood Azra, because I hate being told what I can and cannot do. I also would balk about having my future decided for me and my decisions limited by a ruling class.

In her stubbornness and rebellion against the Afrit, Azra has drifted away from her fellow Jinn "sisters" in the past few years. Upon her 16th birthday and the 16th birthday of the last sister in her Zar, Azra must cope with becoming fully Jinn and also with her feelings regarding her sisters, her mother and her human friends.

I think a little of the beginning of Becoming Jinn could have been trimmed by taking out a little of Azra's sulkiness and stubbornness. There was a sort of mystery to the novel surrounding the Afrit and the Jinn on Earth. Why were men not allowed to travel to Earth? Did Azra's mother or father have anything to do with the new stricter rules for Jinn? I wish this aspect would have gotten more focus rather than Azra's moping. We don't find out what Azra's mom has been hiding until 20 pages are so from the end of Becoming Jinn, and the big reveal was kind of obvious.

I also like that although there was a little bit of teenage romance, Azra wasn't completely obsessed with boys. She has a guy that's a friend, but there's also a focus on her friendship with her human friends and her relationships with her Zar sisters. Azra's friendship with Jenny and her feelings over her loss when she was a child were especially touching for me. I will warn that there is a bit of a love triangle (or square…), but as it's not really the focus of the book, it was bearable.

If you are looking for something a little differently in the YA paranormal genre, I would suggest giving Becoming Jinn a try, especially if you like stubborn heroines and more of a focus on family and friendships than teenage hormones.