Today I received an interesting email. It is as follows: 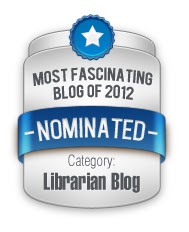 
An article you wrote in 2012 titled Waiting on Wednesday (2) has earned your blog anomination for a Fascination Award: 2012's Most Fascinating Librarian blog.

The comments posted in response to your post prove that your content not only inspires your audience, but it also creates discussion around your posts, both of which are requirements for the nomination of a Fascination award.


As a nominee of this award, you have full permission to display the "Nominated" emblem on your website. To learn more about the contest, the rules, or the prizes, click here: 2012 Fascination Award Rules and Prizes.


Good luck and thank you for your participation!

At first I was flattered, but then I realized that there wasn't very much of a discussion on that post that would merit such a nomination. I mean, you guys are great, but a five comment conversation doesn't seem like something that would put me in the running against some fantastic blogs. That caused me to do some research. Reading three blogs I found on Google (TYWKIWDBI and then to Quantum Progress and dy/dan) helped me decide that it would probably be in the best interest of my followers (I love you guys) and myself to respectfully decline this nomination.

Even though I am taking myself out of the running, it does not mean that a celebration is not in order. Isn't it always said that it is an honor just to be nominated? Well, I think it's a load of malarkey in most cases. People want to win! Oh yeah, I think someone needs to win something after all of this nonsense. 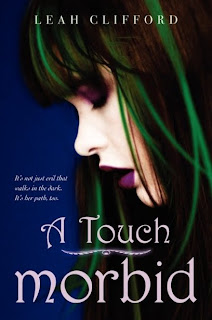 So, Leah gave me some Awesome of a Lifetime sweetness (it won't really be real until I see the book), and I want to give one of my US followers a copy of A Touch Morbid*. (Sorry International Awesome Squad, the next one includes you, I promise.) Time for some Rafflecopter fun!

*Okay, if you haven't read the first book in the trilogy - A Touch Mortal - you can choose that as your prize instead!
Labels: A Touch Morbid, Award Nomination, Giveaway, leah clifford
Email ThisBlogThis!Share to TwitterShare to FacebookShare to Pinterest