Review: The Black Circle (The 39 Clues) 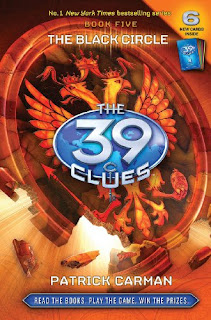 Title: The Black Circle (The 39 Clues, Book 5)
Author: Patrick Carman
Publisher: Scholastic
Release Date: August 11, 2009
The Black Circle is the fifth installment of the multi-author collaborative series, The 39 Clues. These middle-grade books focus on Amy and Dan Cahill's race to find the thirty-nine clues their ancestors have hidden across the world, after the death of their grandmother. This novel was written by Patrick Carman, who has written more than twenty books.
Dan, Amy, and their au pair, Nellie, are still in Cairo following Beyond the Grave. As the children search out a hidden message, they find themselves caught in a whirlwind, time sensitive mini-treasure hunt. Since they are forced to leave Nellie in Egypt, Amy and Dan find themselves in Russia at the mercy of their secret helper (who may be leading them into a trap). They must form alliances with former opponents for the clues in order to find their fifth clue before their time runs out.
I really enjoyed The Black Circle because of the extensive character development. We are given a more positive insight into the Holt family, as well as Irina's relationships with other members of the Lucian branch. I would have enjoyed seeing more of Nellie and the Kabras, but Irina Spasky and Hamilton Holt are now two of my favorite Cahills in the series. I am still in love with these books, and I began In Too Deep immediately after this one.
Labels: 39 Clues, Patrick Carman, Scholastic, The Black Circle
Email ThisBlogThis!Share to TwitterShare to FacebookShare to Pinterest