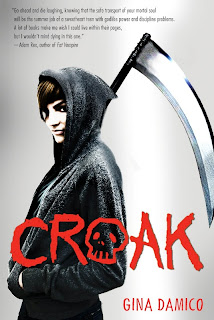 Title: Croak
Author: Gina Damico
Publisher: Houghton Mifflin Harcourt
Release Date: March 20, 2012
Sixteen-year-old Lex Bartleby has sucker-punched her last classmate. Fed up with her punkish, wild behavior, her parents ship her off to upstate New York to live with her Uncle Mort for the summer, hoping that a few months of dirty farm work will whip her back into shape. But Uncle Mort’s true occupation is much dirtier than that of shoveling manure.

He’s a Grim Reaper. And he’s going to teach her the family business.

Lex quickly assimilates into the peculiar world of Croak, a town populated entirely by reapers who deliver souls from this life to the next. Along with her infuriating yet intriguing partner Driggs and a rockstar crew of fellow Grim apprentices, Lex is soon zapping her Targets like a natural born Killer.

Yet her innate ability morphs into an unchecked desire for justice—or is it vengeance?—whenever she’s forced to Kill a murder victim, craving to stop the attackers before they can strike again. So when people start to die—that is, people who aren’t supposed to be dying, people who have committed grievous crimes against the innocent—Lex’s curiosity is piqued. Her obsession grows as the bodies pile up, and a troubling question begins to swirl through her mind: if she succeeds in tracking down the murderer, will she stop the carnage—or will she ditch Croak and join in? (via Goodreads)

I have seen this book floating around the blogosphere for some time now. When I finally got around to checking out the description, I knew that it was for me. The fact that there is absolutely no mention of a hot guy in the summary hooked me. While I do not mind reading romances, it sometimes annoys me that a female character cannot be a strong, amazing heroine unless there is a guy watching. While I understand how valuable romantic relationships are to many teen readers, it is equally important for young people to see they can accomplish things and be awesome for no one but themselves. I really hope that this book is an example of that. I cannot wait to find out.
Labels: Croak, Gina Damico, Waiting on Wednesday
Email ThisBlogThis!Share to TwitterShare to FacebookShare to Pinterest