Cover Reveal: My Heart Be Damned 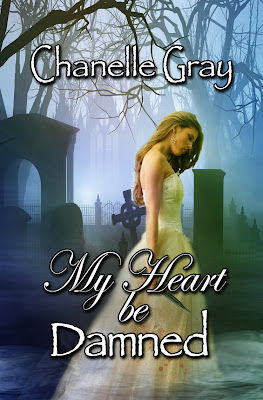 Title: My Heart Be Damned
Author: Chanelle Gray
Publisher: Knight Romance Publishing
Release Date: July 15, 2012
If you're a Hunter, there are only three things you must know about the Damned. The Damned can't lie, can't live without a body, and can't leave you alone.


Amerie Carter has the blood of a Hunter, unfortunately. She is one of a rare line of women who, upon her sixteenth birthday, will come into extraordinary powers used to hunt the Damned; escaped souls from Hell who take up residence in human bodies. It's supposed to be her sweet sixteen, but Amerie has never dreaded a day more, and her worst fears are confirmed as the celebration turns tragic when her mother is killed.


Grief-stricken, Amerie vows to never hunt a day in her life. She's determined to hide behind normalcy, attending school, hanging out with her friends and working an after-school job at The Hut. All Amerie wants is to be left alone. But try telling the Damned that. The harder Amerie tries to ignore her powers, the more the Damned come looking for her.


When an attack leaves one of Amerie's friends in the hospital, and endangers the lives of her fellow students, she knows she has no choice: Hunt or Be Hunted. Thankfully, the gorgeous, secretive, and so-off-limits Marshall offers to train Amerie to take out her supernatural enemies. But training with Marshall means leading lying to her friends, her family, and confronting the mysterious circumstances surrounding her mother’s death.


Amerie soon discovers she’s not the only one with something to hide, Marshall's secrets might kill her before the Damned get the chance.


So what do you guys think of the cover?
Labels: Chanelle Gray, Cover Reveal, My Heart Be Damned
Email ThisBlogThis!Share to TwitterShare to FacebookShare to Pinterest