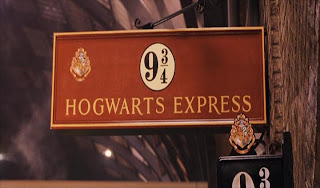 I was (mostly) an adult when I started reading Harry Potter. London and England both had always held a certain appeal for me. However, when J. K. Rowling's masterpiece planted the idea in my mind that there may be more, I was read to drop everything and find my way out of the Muggle world.* 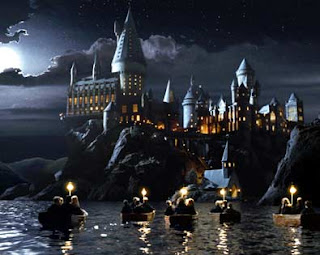 Of course, everyone dreamed about receiving that magical letter inviting them to attend Hogwarts. The castle is an amazing world in itself, consisting of moving staircases, rooms that only sometimes exist, ghosts, and a Forbidden Forest that just begs for shenanigans. While I would love to learn to use magic there, I found many of the teachers terrifying. (I'm looking at you Professor McGonagall.)

I would also love to take a shopping trip on Diagon Alley. I think I could while away a fortune at Flourish and Blotts bookstore. Other points of interest to me would be Gambol & Japes joke shop, Florean Fortescue's Ice Cream Parlor, and the Magical Menagerie. And who can forget Weasley's Wizard Wheezes? I would be lying, though, if I told you that the main reason I went was not to sit and stare for hours at the various wizardly passerbys. 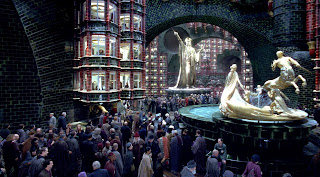 So, wizards of world, you may not exist and your world may be just a fun fantasy. However, I still imagine that one day you would open a position for me at the Ministry of Magic. I am quite happy being a Muggle, and I think I could do a superb job as the Ambassador for the American Muggles. I would even let you call me a Yank**.
*Hey, I said I was mostly an adult. We can all fantasize.
**Unless you're a wizard, don't call me a Yank. I'm from the South, and we don't care much for that label down here.
Labels: Best Escapist Book Locations, Diagon Alley, England, Harry Potter, Hogwarts, J K Rowling, London, Ministry of Magic, Muggle
Email ThisBlogThis!Share to TwitterShare to FacebookShare to Pinterest