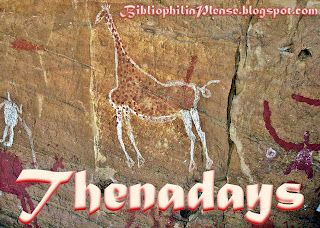 For the sake of trying something different here at Bibliophila, Please, Thursday is now Thenadays. 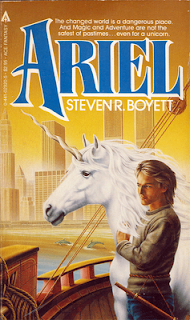 Title: Ariel
Author: Steven R. Boyett
Publisher: Ace
Release Date: December 1, 1983
At four-thirty one Saturday afternoon the laws of physics as we know them underwent a change. Electronic devices, cars, industries stopped. The lights went out. Any technology more complicated than a lever or pulley simply wouldn't work. A new set of rules took its place—laws that could only be called magic. Ninety-nine percent of humanity has simply vanished. Cities lie abandoned. Supernatural creatures wander the silenced achievements of a halted civilization.


Pete Garey has survived the Change and its ensuing chaos. He wanders the southeastern United States, scavenging, lying low. Learning. One day he makes an unexpected friend: a smartassed unicorn with serious attitude. Pete names her Ariel and teaches her how to talk, how to read, and how to survive in a world in which a unicorn horn has become a highly prized commodity.


When they learn that there is a price quite literally on Ariel's head, the two unlikely companions set out from Atlanta to Manhattan to confront the sorcerer who wants her horn. And so begins a haunting, epic, and surprisingly funny journey through the remnants of a halted civilization in a desolated world. (via Ariel's Website)

This is the first post-apocalyptic book that I can remember reading - back when I didn't even know anything about these so-called "genre" things. All I knew was that it was a book with a unicorn on it, and I was all over it. You guys already know I'm weird, so I'll go ahead and admit that I used to be obsessed with unicorns. I've calmed it down over the years, but I'm still drawn to them. But you're here about the book, right?

Ariel was one of my first ventures outside of the high or epic fantasy genre that wasn't required school reading. I was tricked by the cover, and by the time I read the first two or three chapters, I was irrevocably hooked. It is a beautiful story of a boy and his quasi-horse who has a potty mouth, who are trying to survive in a world that neither of them really understand. Pete grew up in a world with the normal, scientific rules and experienced the horrors of what humanity is capable in disaster. Ariel was a baby when Pete found her not long after the Change - in a world where she was only a myth before.

Ariel is one of my favorite literary characters. She is not some angelic creature who sprinkles love and rainbows across the land. She is obsessed with peppermints to a fault, loves Don Quixote, and is constantly on her toes to keep Pete out of trouble. Oh, she is also extremely jealous and curses like a sailor sometimes. (No strong language, so don't worry.) Ariel is very human, except for the fact that she is a unicorn. And who wants to walk around all wobbly on two legs anyways?

I am not going to spoil anything for you, but I do my infamous Ugly Cry every time I read this book. Every. Time. Without fail. Oh, it's bad. But the book is so, so good.

Steven R. Boyett released Elegy Beach, a sequel to Ariel that only took twenty-five years to come out. I bought it immediately, but I have not read it yet. I do not know if Ariel is in it or not, and to be honest, that's why I read the original book. Pete is fantastic, but he's no unicorn.
Labels: Ariel, Post-Apocalyptic, Steven R. Boyett, Thenadays
Email ThisBlogThis!Share to TwitterShare to FacebookShare to Pinterest