Hullo, fellow bibliophiles and booklovers! I have someone special on the blog today. Rachel Hunter is a college student who was kind enough to take a break from her busy school and writing schedule to answer a few questions about writing and her debut novel, Empyreal Fate. 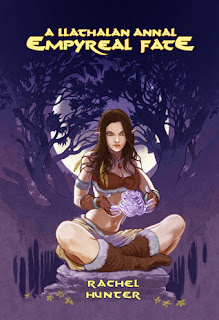 Filled to the brim with forbidden love, an ancient evil, and a nation in disrepair, Empyreal Fate is a tale of riveting bravery and mortal corruption.

The land of Llathala lingers on the brink of war between men and elves, a dark history surrounding each race. Stirred by tensions of the land, a shadow of the past reemerges, taking precedence in reality and consuming the very soul of mans’ mortal weakness. Darrion, the son of a poor laborer, is ensnared in a hostile world, forced to choose between loyalty to his king or the counsel of the elves. Yet Fate has other plans in store, tying his course to Amarya, an elven royalblood of mysterious quality and unsurpassable beauty. But this forbidden connection incites betrayal from members of their own kin, marking them as traitors to the crown. In a land torn asunder, only Fate’s decree can allow such love to coexist with an ancient enmity.

Thank you so much for stopping by Bibliophilia, Please to answer some questions, Rachel! You’re a very young published author. How old were you when you wrote your first novel?


First of all, I would like to thank Kayla for taking the time to host me on her blog. The pleasure is truly mine~

How old was I when I wrote my first novel? Well, I’ve been writing since I could ever remember, but Empyreal Fate is the first novel I’ve written to completion. I’ve always started various manuscripts, and I have old notebooks filled with handwritten notes and ideas, but I would only partially write them before I moved on to begin other projects. With Empyreal Fate, however, I was inspired to continue until it was complete. I cannot recall the exact time-frame that it took to write it, but I do remember coming up with the base plot during my fifth grade year. Through the years since, I garnered ideas and rewrote it numerous times until it was finally accepted for publication through Hydra Publications.

Can you tell us a little bit about Empyreal Fate in your own words?

My Llathalan Annal series is of the fantasy genre, and Book One – Empyreal Fate – introduces the land of Llathala and its many civilizations – particularly the races of men and elves – and it delves into their ancient feud and close boundaries. Indeed, the kingdom of man is starving and rapidly growing, yet the proximity of the elven nation, coupled with man’s unwarranted fear, keeps the commoners from straying far. Yet a figure named Darrion defies the decree of old and passes into the Forest Illex, home of the elven kingdom of Androth. And what he finds within may very well change his life forever. But that’s only the beginning… Fate has yet to deal its hand.

It’s a tale of love, bravery, and mortal corruption. (And yes, there are elves – my favorite of the fantastical creatures).

What was the first thing you knew about Llathala (or the characters) when you began writing Empyreal Fate?

I knew about one of the main characters: the elven royalblood, Amarya. I knew she was to be a regal figure – upright and majestic – one who defies the rank of nobility, for she believes all should live as one within the tapestry of life regardless of class. I knew from the outset that she was to be a cautious character, always curious but ever-alert. Yet the claim of true love is powerful enough to shatter even her rigid wall of mistrust for mankind.

What was the hardest thing about writing your novel?

My OCD and perfectionistic tendencies oft led to me spending more time than I should each day writing and/or editing. Sometimes, I hardly knew if the sun was shining during any given day! I would lock myself in the room, meditate in the silence, and write for hours on end, feeling as though I had to write for such long time periods. I’ve since learned otherwise, however, and I don’t nearly write so much at any given time. I know when to give myself a break.

Since you are also a college student, how did you make time to write?

Luckily, I had finished Empyreal Fate before college began, so I only had to go through editing when classes began. During high school, however, I would just plan accordingly around my schedule. It helped to spend most of the summer doing the major writing. That way, I didn’t have to worry about studying, homework, or projects.

Which books or authors would you say have affected or inspired your writing the most?

Ah! A difficult question indeed; for I have been influenced by all works in which I have come into contact: whether they taught me techniques I adore or whether they expressed a concept I now avoid – the list is ever-lengthy. Although, perhaps the first true fantasy epic I have ever read that influenced me positively was The Sword of Shannara, by Terry Brooks. But I also share an infatuation for David Eddings, JRR Tolkien, Kurt Vonnegut, and Stephen Donaldson.

Between reading textbooks and studying for finals for college, I am reading Dreadnought, by Cherie Priest and Without a Conscious, by James Peercy.

Are you working on any other projects right now? If you can, please tell us a little bit about it/them.

Actually, I am working on a concept for my first Steampunk novel. I don’t want to get into much detail about it yet – as I’m only about a third of the way into it – but I’ve incorporated aspects of the Victorian era in a sci-fi, fantastical realm with dirigibles, sky pirates, and yes… corsets! I’m quite excited about it, and I’m looking forward to what the Muse brings each day.

Write much, laugh often, and read a lot. Truly. There’s nothing greater for the mind, body, and spirit than a creative and fun-loving day. So why not make it a habit? A life-style? Embrace your creative whims.

And also – when you read and write, look beyond the mere mortal contrivance of words, and grasp instead the deeper meaning within: the depths of the soul and the meaning of virtue. Listen to the pattern of words – yes… but also take away the ambiguity of life: the divine essence within us all. Read, write, and awaken. Do this with everything your eyes devour or your pen creates.

Thank you so much for your time, Rachel! You were such a pleasure to speak with, and I hope you come back to visit us again!


Buy your copy today on Amazon!
Be sure to add Empyreal Fate to your TBR list on Goodreads!

Born in 1993, Rachel Hunter has always been fascinated with words and the intricate way in which they combine. Since a child, she has been an avid writer, winding vibrant tales and elaborate stanzas on folded bits of paper. 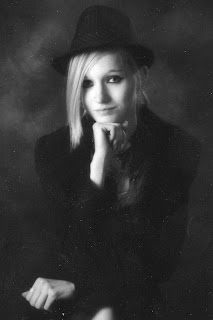 As the years passed, her love of words never died; her adoration for reading fared no equal. Always with her nose in a book, Rachel took fondly to works spanning all genres. Yet it was the compelling grasp of fantasy and science fiction that wrenched her fascination above all.

In 2007, Rachel was selected a state winner of the Minnesota Promising Young Writers Program. Accordingly, her winning poem, "It All Starts with Creativity", was published in An Anthology of Poetry by Young Americans.

Senior year of high school proved another momentous year. A winner of the Oklahoma Young Writers Competition, Rachel was awarded with publication of her "Sestina of Elven Regret" in the 2010-2011 anthology, Growing Voices.

In March of 2012, Rachel published her first short story with Trestle Press, titled, "Perfect Nothing", which recounted her harrowing relationship with an eating disorder and was also fueled by her passion for psychology. But her writing does not end there. While currently pursuing a degree in psychology and in the medical field at the University of Oklahoma, she aspires also to illuminate the creative spark of eager readers. In her desire to incite intrigue, she is simultaneously exploring new worlds and creating vast empires of her own. "Empyreal Fate" is only the first in her Llathalan Annal series. Indeed, it is only the beginning.