On Bibliophilia, Please today, the fascinating William Todd Rose has stopped to promote his new book, The Seven Habits of Highly Infective People. He was kind enough to answer some questions for us about his book, other zombie novels, and writing. 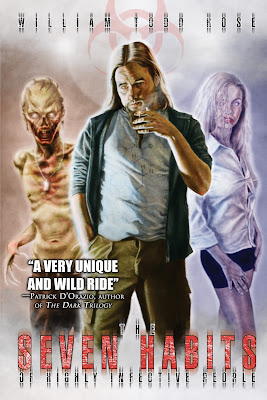 Bosley Coughlin can travel through time. And the future does not look good.

Through a heady cocktail of drugs and the occult, Bosley slips through time and space and glimpses The End. Cities lay in ruins, and those who still cling to life hide in the rubble like frightened animals. Walking carcasses shamble through the debris exacting a horrible fate upon any living they find.

This horrific future is the only world fourteen year old Ocean has ever known. Starving and alone, she struggles for even the most basic of necessities: food, water, shelter, love…

In the present, Bosley stumbles across Clarice Hudson and soon realizes that she is much more than a simple shop girl. One by one, she displays the seven symptoms of the contagion that will bring Bosley’s world to an end and create the nightmare Ocean calls home. Clarice may hold the key to stopping the coming apocalypse and sparing Ocean from the atrocities of mankind’s imminent future… but only if Coughlin is willing to push beyond every notion he’s ever held about right and wrong.

First off, William, I would like to thank you so much for answering questions for my readers here at Bibliophilia, Please. I have to be honest and ask you about the first thing that came to mind when I read the title – that other book. How does the Seven Habits of Infective People compare to The Seven Habits of Effective People?


You know, it’s funny because my wife has always thought I should have titled it differently. Other than the title, there’s no real link between it and Covey’s self-help book. In fact, the seven “habits” referenced in the novel would more accurately be described as symptoms. My time traveling, drugged-out protagonist, Bosley Coughlin, uses these symptoms as a checklist of sorts to ensure that the woman he’s stalking is indeed a carrier of the virus that levels civilization. They’re not even referred to anywhere in the novel as habits, so maybe my wife was right. Don’t get me wrong, I still personally like the title; but, at the same time, people shouldn’t go into this book expecting it to be a light parody of the self-help genre. I deal with some pretty dark themes in the book: destitution, drug abuse, a virus that –in the early stages –can be likened to an STD, matricide, and a few other topics I can’t really mention due to spoilers. In essence, it’s a novel about people operating in areas of moral ambiguity. They’re good people at heart who have to make some really difficult decisions in the name of survival.

What do you think makes The Seven Habits of Infective People stand apart or different from the other zombie novels in the genre?

Based on the feedback I’ve received from readers and reviewers, there’s quite a bit. To begin with, The Seven Habits isn’t a straight-up tale of survival horror. The zombies definitely play an important role in the novel and are crucial elements in certain scenes; but the book isn’t about the characters going from one zombie infested situation to the next. There’s a lot of personal conflict taking place, a lot of betrayal, guilt, and conflicting emotions. This isn’t to say there’s not any action because there definitely is. I simply chose to include a lot of character development so that the reader will hopefully empathize more strongly with the characters who find themselves in these screwed up situations.

There’s also the time travel aspect of the story. I’m not really sure if that’s been attempted in the zombie genre or not. Regardless, I knew when writing the book that traveling through time was critical to the plot. However, I really didn’t want to employ any type of mechanical device to accomplish it. The time travel here is more metaphysical than physical. Through experimenting with drugs and the occult in a search for enlightenment, Bosley inadvertently opens a mystical portal he calls The Eye of Aeons. It spontaneously pulls his consciousness through time and plops him down within the mind of a host. He experiences life through their perceptions and is privy to every thought and memory that crosses their minds. But he’s powerless to control the host’s body. He’s like a hitchhiker who’s latched onto a passing soul and is just along for the ride.

Another difference is that I kind of combined the two most popular zombie archetypes and rolled them into a single story. The future that my 14 year old heroine, Ocean, grew up in is set when humanity is all but extinct. Less living people means that there are also less fresh zombies roaming around. These Rotters, as she calls them, are your classic Romero shufflers. They’re uncoordinated and slow, not particularly strong, and are in various stages of decomposition. Bosley’s timeline, however, is characterized by the presence of The Infected.  At this point, no one has started coming back from the dead yet. But the seeds are being sown. The same virus that eventually reanimates corpses upon death is also responsible for the complete psychological disintegration of the living. Those infected with the virus lose control of their own minds and bodies; the disease manipulates their physiology so they are driven to create the perfect environment for it to thrive. One of the symptoms is that the victim’s pleasure center in the brain is working overtime, leading to involuntary promiscuity which passes the disease to another host. In later stages, the victims become uncontrollably violent and incapable of coherent thought. At this point, the human they used to be is basically dead. Their hearts beat, their lungs breathe, they bleed when cut … but that’s it. Since they’re not dead, they’re fast and cagey and are basically the perfect predator.

Has there ever been a time during your brainstorming/writing process that you could not sleep or had nightmares because of your ideas for your stories? If so, what do you do to unwind or get the dark thoughts out of your head?

I’ve never had nightmares stemming from things I’ve written, but I spend hours with my head wrapped within the details of a story when I should be sleeping. The best thing for me in these situations is to simply stop fighting it. If I get up and write for a while, I’ll actually fall asleep more quickly than if I just laid there tossing and turning. Usually. When Lincoln Crisler put out a submissions call for an anthology he was editing, this technique betrayed me. I stayed up all night finishing the story I had in mind and had just enough time to save the file before leaving for my day job.

What was the hardest part of writing The Seven Habits of Highly Infective People?

The hardest parts were the things I put my characters through. I really liked Bosley and Ocean and had formed a pretty solid emotional connection with each of them. I’d get upset because deep down inside all I wanted was for both of them to be safe and happy. I didn’t want them being forced to make decisions no person should ever have to make. But the worlds they live in aren’t exactly overflowing with rainbows and lollipops. They’re dark and gritty and require new definitions of morality to survive.

Which books and/or authors have been your biggest inspirations in writing and in life?

Neuromancer by William Gibson had a huge impact on me. There are passages in the book that, to this day, literally take my breath away. The man is a genius. Dharma Bums by Jack Kerouac and William S. Burrough’s Junkie fueled my passion for writing, as well. Other important books in my life are Fight Club by Chuck Palahniuk, the collected works of H.P Lovecraft, and a book I can’t remember the name of. I’d checked it out from the library in elementary school and it was an anthology of horror stories. One of them dealt with butterflies on an island that could strip the flesh off a man. Another was set in the old west and was about a hag who haunted a stagecoach, stealing the breath of those who rode within it. I really wish I could remember the name of that book. Of the stories, even. But it’s been lost to time.

Right now, I’ve been reading Gold of the Gods by Erik Von Daniken and The Secret Life and Brutal Death of Mamie Thurmond by Keith Davis.

In closing, if you can, tell us a little bit about whatever project you are currently working on. Do you have any upcoming releases that we can look forward to?

Right now, Carl Hose and I are working on a collaborative novel tentatively entitled Black Rain. It’s a sci-fi/apocalyptic-horror hybrid in which the invading aliens are far, far removed from being technologically advanced. Rather than spaceships, they enter our plant imbedded within tough little spores that survived the harsh environments of space. They’re primal and viscous and creatures of pure instinct. If you took all of humanity and suddenly dumped them in the Jurassic era, the results would pretty much be the same.

I’m hoping we have this ready by early Fall. I’d love to debut the book at the Horror Realm convention in Pittsburgh this September and maybe do a reading from it.

In addition to this, I’m also working on The Dead Trap. This is book two in the Tides of Time series that began with The Seven Habits of Highly Infective People. I’m fleshing out the importance of what may have seemed like minor details in the first book while also planting hints of things to come in the next.  The book picks up right where the first left off (at least as much as possible when time travel is involved).

Thanks for answering my questions!

The pleasure was all mine. Thanks for having me!


Be sure to add it to your TBR List on Goodreads!

If you are still wanting more, be sure to check out all of the stops on The Seven Habits of Highly Infective People Blog Tour: 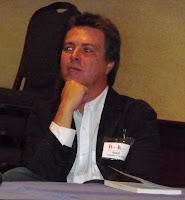 Named by The Google+ Insider’s Guide as one of their top 32 authors to follow, William Todd Rose writes speculative fiction that lends itself to the dark, and often surreal, realm of the macabre. With short stories appearing in numerous magazines and anthologies, his longer works include The Seven Habits of Highly Infective People, The Dead and Dying, Cry Havoc, and more. For more information, including links to free fiction, please visit the author online at www.williamtoddrose.com. You can also find him on Facebook and Goodreads.
Labels: Author Interview, Blog Tour, Innovative Online Book Tours, The Seven Habits of Highly Infective People, William Todd Rose, Zombies
Email ThisBlogThis!Share to TwitterShare to FacebookShare to Pinterest