Review: The Wicked and the Just by J. Anderson Coats 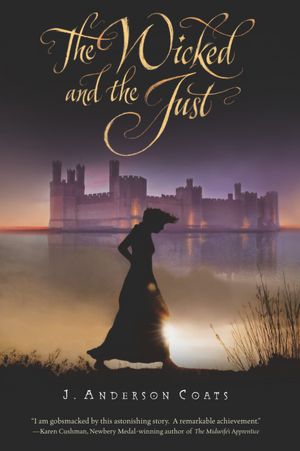 The Wicked and the Just is the debut novel of J. Anderson Coats. It is historical fiction and focuses on the lives of two girls forced together during the early years of England’s subjugation of Wales in the late thirteenth century and told from alternating points of view. The novel is aimed at the young adult audience.

Cecily d’Edgely thinks life is very unfair. Since her uncle’s return from the Crusades, she and her father lost “their” claim to the family holding. To make matters even worse, she is to leave her friends, family, and all that she knows behind to start a new life in Wales – that’s if she isn’t murdered by barbarians first. Once there, they are no better than foreigners in Caernarvon until her father is sworn in as a burgess.

Gwenhwyfar hates the English. Not only have they taken Wales, but they have also broken her family. Her father hung from the castle walls after he refused to swear allegiance to the English king. Due to her family name and the difficulty for men to find work, she is forced to work as a maid in a house that should belong to her. If it wasn't for her brother Gruffyd – who was too honorable to take jobs before family men – or her dying mother, she wouldn't have to deal with the English brat who she hates.

I enjoyed The Wicked and the Just, but it took me longer than usual to read it. The characters were believable, but I found hard to form a connection to them. Cecily was a spoiled rotten, nasty little brat who was capable of terrible cruelty, and "Gwinny" was like a shark waiting to strike. I always felt closer to Cecily – even though I felt the constant urge to shake her – because Gwinny terrified me. The title represents the characters because every one of them in the book behaved quite wickedly, and all believed themselves to be just or serving justice.

I do have one complaint about the language used in the book. Gwinny's chapters were written in a manner that went overboard in demonstrating that English was not her first language. It was hard enough to read her chapters with all of the rage she had pent up inside of her, but Gwinny's crudely written POV was distracting. This angry girl was a lot of things, but stupid or ignorant do not show up on that list. It definitely affected my ability to relate to her. Cecily's mixture of period and modern slang stood out a little at first, but it was not noticeable once I was well into the book.

Despite the minor issues that I found with The Wicked and the Just, I found it to be a well-researched, enjoyable, and educational read. I learned things about that period in history that I have only skimmed over in my own historical studies. J. Anderson Coats really brought the setting to life and was able to tell the story in such a way that neither "side" was vilified. I would even go so far as to say that it was one of the most unbiased historical fiction novels that I've read. I would recommend this to anyone who enjoys reading historical fiction (young and older) or novels that center on enemies coming to see eye-to-eye.


Available to Purchase: Amazon | Barnes & Noble | Book Depository
Be sure to add it to your TBR list on Goodreads!

*To satisfy FTC guidelines, I am disclosing that I received the book for free from the publisher in exchange for an honest review. It has in no way affected the outcome.
Labels: historical fiction, J. Anderson Coats, The Wicked and the Just, Young Adult
Email ThisBlogThis!Share to TwitterShare to FacebookShare to Pinterest