Review: The Moonstone by Nikki Broadwell 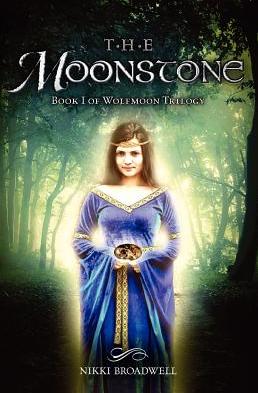 The Moonstone is the fantasy debut novel of author Nikki Broadwell that is based on Celtic and Gaelic mythology. It focuses on the pregnant Finna and her mother, Catriona, as they travel to the Glass Mountain to have the unborn child blessed by the goddess Arianrhod.

Finna has finally taken control of her life. She's living in a cottage on her own, after escaping her abusive husband and overbearing father. Unfortunately, her supposedly dead mother shows up on her doorstep, insisting they travel into a parallel world where the old ways still exist. Catriona will not take no for an answer, despite the danger the trip holds for Finna and her unborn child. The existence of the Otherworld is at stake, and Finna may just be a key piece to its survival.

I have always been a fan of mythology-based stories, and this one was no exception. Nikki Broadwell's use of the mythology was unique and the quest was stirring. The Otherworld was nicely crafted and interesting to explore with Catriona and Finna. The characters were damaged in some way or another and had a colorful history guiding their actions. Catriona was the most fun to read, as she was always shocking her very conservative, backward daughter Finna with her "free love" behavior.

There were, however, some problems that I had with the execution of the novel. A major one I had was the inconsistency of the spelling of certain Gaelic words. In some cases, it was used to show Finna's ignorance of the language (which was used in Otherworld), but I think it was editing mistakes in most cases. One example was the word "mathair", which means "mother", was commonly misspelled "mahair", and it distracted me from the story. I also had an issue with the manner in which a few characters were brought into the story. Sometimes they were introduced to Finna (and the reader), but others were just written into the story as if we should already know who they are. These were all mistakes that I think would have been caught in another round of edits.

Overall, The Moonstone was a quick read and interesting fantasy adventure. It is well worth reading, despite my aforementioned issues. I finished it quickly and enjoyed it.


Buy it today: Amazon | Barnes & Noble | BetterWorldBooks
Be sure to add it to your TBR list on Goodreads!

To satisfy FTC guidelines, I am disclosing that I received this book for free from the author in exchange for an honest review. It has in no way affected the outcome.
Labels: Nikki Broadwell, Review, The Moonstone
Email ThisBlogThis!Share to TwitterShare to FacebookShare to Pinterest