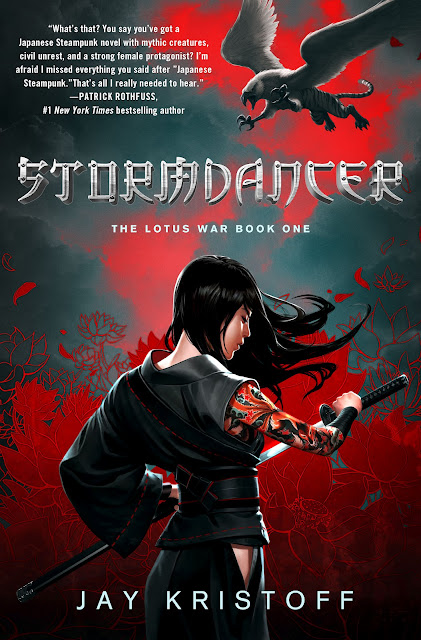 A DYING LAND
The Shima Imperium is verging on the brink of environmental collapse; decimated by clockwork industrialization and the machine-worshippers of the Lotus Guild. The skies are red as blood, land choked with toxic pollution, wildlife ravaged by mass extinctions.

AN IMPOSSIBLE QUEST
The hunters of the imperial court are charged by their Shōgun to capture a thunder tiger—a legendary beast, half-eagle, half-tiger. But any fool knows thunder tigers have been extinct for more than a century, and the price of failing the Shōgun is death.

A SIXTEEN YEAR OLD GIRL
Yukiko is a child of the Fox clan, possessed of a hidden gift that would see her executed by the Lotus Guild. Accompanying her father on the Shōgun’s hunt, she finds herself stranded: a young woman alone in Shima’s last wilderness, with only a furious, crippled thunder tiger for company. Even though she can hear his thoughts, even though she saved his life, all she knows for certain is he’d rather see her dead than help her.

But together, the pair will form an indomitable friendship, and rise to challenge the might of an empire.


Preorder it today! Amazon | Book Depository
Don't forget to add it to your TBR list on Goodreads!

Oh man, I’m so excited about this book! No, for real. I am REALLY excited about reading this. I preordered this book a few months ago, and I was only waiting on the cover to post it as my WoW. I love that there are so many books with Eastern settings now, and I know that this one is going to be one of the best. I mean, it’s put out by Tor (and Macmillan/St. Martin's Press in the US)! Also - Kevin Hearne said it was good. You guys know that, to me, he is like a god of urban fantasy and awesome. If he says it’s good, then it’s great as far as I’m concerned. He said on Twitter one day that Jay Kristoff was great, and I tracked that man down like a bloodhound. What kind of fangirl would I be if I didn't hang on his every word?! I've been stalking Jay  ever since.