Look - another interview! Today we have Travis McBee, the author of Bridgeworld. 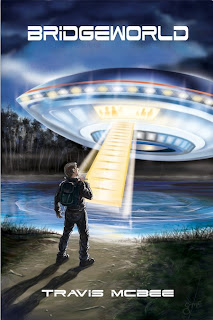 William Haynes was the type of guy that everyone either wanted, or wanted to be. He was an honor roll student and captain of his middle school football team. He was dating the most popular girl in the school and had dozens of friends.

Yes, life was perfect for Will…that was, until a strange man showed up and forced his parents to reveal a secret they had kept hidden since he was born.

Travis, first I would like to thank you for taking the time to answer some questions here on Bibliophilia, Please. According to your bio on Hydra Publication’s website, you wrote Bridgeworld during your sophomore year of college. I have to ask – were you fantasizing about alien abduction as an escape of the course load?

Ha! Not really, but the course load – it was nice getting away from all of that work.

In all seriousness, what was your inspiration in writing Bridgeworld?

The inspiration came from a book I had read years before called The Dark Side of Nowhere. The book was about a small town whose residents were actually aliens who had crash landed there decades before and raised kids who they disguised and raised as humans. I was thinking about the book when I wondered what it would be like if one of the kids was forced to reintegrate into his parents old society.
Please tell us a little bit about Bridgeworld in your own words.

Bridgeworldis a book about a boy whose parents were born on another planet and moved to earth before he was born. They aren’t like most aliens in the fact that they are human. They raise the boy without telling him of their past until he gets a scholarship to their old school. He decides to go to Bridgeworld (the name of that school) and goes on all of the adventures that living in space might entail.

How long did it take you to write your novel? How many drafts did you do?

When I first got the idea, it was summer. I wrote a first chapter to the book, but I got discouraged because it was becoming very weird. In that draft, they were all aliens and he was going to be some kind of super being. I scratched the entire project. Later that year, I was at my parents’ house for Christmas break when I found the chapter on my computer. I got to thinking about it again and wondered what would happen if I made him human. From there the book took off. I finished the first draft in three months. I did about three rewrites on it, but the changes were all minor. In all, I probably worked on it for about six months.

I related to Will quite a bit. I hadn’t been as popular as him in high school, but I had enjoyed a large group of friends and fit in quite nicely. When I went to college, I chose a university that was in a very different area from me. It was different enough to feel almost alien. It took me a long time to adjust and make new friends, and that feeling helped me write from his perspective quite easily.

My favorite character would have to be Abby though. She was delightful and humorous. She also speaks in a French accent when on earth because of faults in the translating device—I found that hilarious for some reason. She’s also a very complex character and is not at all what she appears to be.

Can you tell us about your road to publication?

It was the typical horror show. I didn’t grow up dreaming of being an author – I just got it in my head that I wanted to write a book one day – so I didn’t know about the wonderful world of queries and agents. The rejections piled up quickly, and I learned that writing the book was probably the easiest part. I actually gave up on trying to sell it after about fifty rejections.

Almost a year after I had finished the book, I was looking through a listing of publishers to send a short story to when I discovered the world of small presses. (Remember I was a newbie to the writing world.) I sent off a few queries. Within two days later, I got requests for the full manuscript from about five publishers. After I sent it, I got publishing offers from all of them. I got to handpick the one I thought would do the best job. It was amazing after all of the rejections I had suffered.

Now that your book has been published, would you have done anything different?

I could write the book again today and do a better job, but that’s just the nature of being young in my craft. I grew through my experience and have written five novels now. I learned a lot, am still learning, and honestly have no regrets.

At the moment, I’m finishing up the first draft of a middle-grade novel. I’m also in the process of publishing the sequel to Bridgeworld, which should come out in July.

What does your typical day of writing look like?

I usually start writing at about six or seven in the evening. I write until three or four in the morning, sometimes later depending on what I have to do the next day – I require very little sleep.

What do you do when you’re not writing?

I read a lot. I probably go through about 200 books a year. I also go backpacking at least once a month for a few days. I also enjoy scuba diving, wakeboarding, basically anything that is just a little bit dangerous and a lot of bit fun.

Before we wrap up, I have to ask – did you choose the outer space college or did you stay at NGCSU?

Don’t give up – it’s a lot of work writing, but it’s also a lot of fun and worth it. I’d also recommend doing a lot of research into the publishing side of things. I had always only concerned myself with the writing side and thus found myself bumping around in the dark without really knowing what I was doing. Educate yourself on the business side of things like you would do with any other job.


Bridgeworld is available to purchase now: Amazon | Barnes & Noble
Be sure to add it to your TBR list on Goodreads! 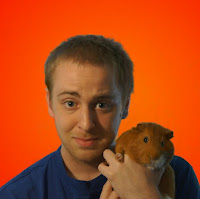 Travis McBee was born and raised just outside of Atlanta, Georgia. He is the younger of two children and enjoys backpacking, playing rugby, and watching football. He is the author of four novels: Bridgeworld, Bridgeworld: Encounter at Atlantis, Triton: Rise of the Fallen, and Triton: The Call of War. He has also written a children’s series: The Chronicles of a Second Grade Genius.

He currently resides in Georgia.