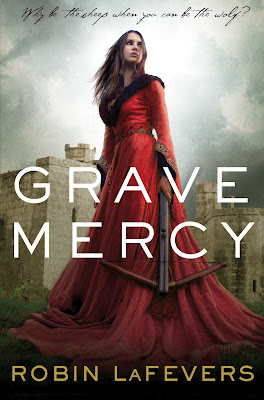 Grave Mercy by Robin LaFevers is a historical romance novel that is aimed at the young adult audience. It has a small mix of the paranormal and mythology that lends to its story about Ismae Rienne, Death's handmaiden.

Life was hard in the 15th century. Surviving an attempted abortion and being raised by a hateful father had to make it even harder. Throw in an abusive husband, and that describes the life of Ismae Rienne. That is, until she is rescued by the followers of the Old Ways in the countryside, who recognize her for what she is. Her life changes for the better when she is taken in by the convent of Saint Mortain, the pre-Christianity god of death. Ismae finds her calling in the walls of the convent - she is an assassin, a genius with poisons, and an adept student. However, all of that may prove to not be enough when she faces an assignment that places her in a dangerous political struggle and in a partnership with the equally dangerous Gavriel Duval.

I love historical fantasy novels (okay, and some historical romance), so I was more than excited to get my hands on Grave Mercy. Reading about imaginary assassin nuns in the 15th century was a huge factor in my starting the book ahead of others on my review pile. Unfortunately, I overheard talk of a romance that played a pretty major role in the book. I was almost turned off and nearly put it down.

I have never been happier to stick with a book.

Grave Mercy is a beautiful story of a young girl who tries to serve her god and country, but must question whether her orders from the convent are right or best. Watching this low-born peasant try to navigate the intrigues of court was never dull. (Who wants to be trained as a courtier anyway?) Ismae was brave, loyal, and she is probably one of the most endearing young adult characters I've ever read.

The only thing better than Ismae's colorful character in Grave Mercy would have to be Gavriel Duval. While I am a bitter old toad when it comes to romance, I found myself swooning at every long look, brush of skin, and witty retort. Robin LaFevers wrote Duval to be so incredibly realistic that I am currently nesting and fantasizing about having little Duval babies. That is no small feat.

I enjoyed Grave Mercy very much and had it read in nearly no time at all. While it was a historical romance, it had enough of a fantasy aspect to keep me interested. I will happily recommend it to most teens and any adult. I would hesitate in giving it to a younger teenager due to the violence and some sexual situations (though nothing compared to adult historical romance).


To satisfy FTC guidelines, I am disclosing that I received this book for free from the publisher and Goodreads in exchange for an honest review. It has in no way affected the outcome.
Labels: Grave Mercy, historical fiction, Robin LaFevers, Young Adult
Email ThisBlogThis!Share to TwitterShare to FacebookShare to Pinterest