Thanks for having me on Bibliophilia, Please today! This week I’m kicking off the second half of my blog tour for the first two books in my House of Arkhangel’sk series from Entangled Publishing: The Fallen Queen, re-released in mass-market trade paperback in June, and The Midnight Court, coming August 14. The middle book of the trilogy, The Midnight Court sees the return of Grand Duchess Anazakia and her demon cohorts, Belphagor and Vasily. Some readers have expressed concern about whether Belphagor and Vasily still feature prominently in the series. I’ll let you in on a little secret: even though it’s Anazakia’s story, my naughty demons are the real protagonists of House of Arkhangel’sk. They aren’t going anywhere, and they will only get naughtier. One very smexy demon, in fact, will be appearing on the cover of The Midnight Court, but for now you’ll just have to imagine him in the blog tour banner above, as the artwork is still being finalized.


Of Mushroom Mounds and Fairy Courts

If you happen to be traipsing through the woods some afternoon, you may come upon a circular mound of mushrooms in a clearing where the dances of fairies have left their mark. The scientific explanation for this is a fungal proliferation of mycelium strands in the soil that stimulates a circular growth of new grass, followed by a profusion of mushroom clusters after a rain as the fungus fruits.

I think it’s more fun to imagine the Unseen folk stepping out on a moonlit night for mischief.

The earthly setting of my series is the Russian Federation. While Russian folk tales are rich with fairy-like beings, there is no specific kingdom of the fairies, no Fairy Queen as in the more familiar folklore of Western Europe. So when I started writing my series, I set about to invent one.

In the wooded parklands surrounding the suburban imperial palaces of Tsarskoe Selo, I decided to place the entrance to the Unseen World. Within a ringed fairy mound off the beaten path, mortals may enter the realm of the syla and the leshi—my Slavic fae—so long as the Unseen wish them to enter. 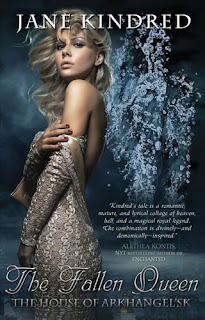 My female fairies, the syla, took their name from the Ukrainian word for spirits. I wanted a catch-all for the feminine nature spirits of my world, and there are syla for every season: the bereginyi who appear in spring, the mavki in summer, the samodivi in autumn, and the snegurochki—snow maidens—who appear in winter. Their male counterparts are the leshi, wild men of the forest who protect the trees.

Ruling over my syla and leshi is a character who bears the name of a Celtic fairy queen—or she used to rule them, until she had a falling out with the syla over the magical flower of the fern. Now Aeval has found a new roost to rule in the celestial realm. But the Midnight Court is where Aeval once presided, its name taken from the epic Irish poem by Brian Merriman about the very same fairy queen who sat in judgment over men who had wronged women.

My Aeval judges men as well, but she takes it a bit farther than in Merriman’s humorous poem. If you’ve read The Fallen Queen, you’ll be familiar with the punishment she metes out to Belphagor for attempting to thwart her grand plan. In Book Two, you’ll discover who once earned her ire in the earthly realm and how it changed our world forever.

Against the pristine ice of Heaven, spilled blood and a demon’s fire will spark celestial war.

The exiled heir to the throne of Heaven, Grand Duchess Anazakia and her demon companions, Belphagor and Vasily, have made a comfortable home in the Russian city of Arkhangel’sk, but their domestic bliss is short lived. When their daughter Ola is taken as a pawn in Heaven’s demon revolution, the delicate fabric of their unorthodox family is torn apart—threatening to separate Belphagor and Vasily for good.

Anazakia is prepared to move Heaven and Earth to get her daughter back from Queen Aeval, risen in Elysium from the ashes of temporary defeat. But Aeval isn’t the only one seeking Ola’s strange power.

To conquer the forces amassing against them, Anazakia is prophesied to spill the blood of one close to her heart, while Vasily’s fire will prove more potent than anyone suspected. In the battle for supremacy over Heaven’s empire, loyalties will be tested and secrets will be revealed, but love will reign supernal.


Pre-order The Midnight Court - Available August 14!
Amazon | Barnes & Noble | The Book Depository | Powell’s Books
Be sure to add The Fallen Queen to your TBR on Goodreads!

Jane Kindred is kindly giving away an ecopy of either The Fallen Queen or The Midnight Court to a lucky reader. If the winner chooses The Midnight Court, it will be gifted to them in August. All you need to do to win is enter this lovely little Rafflecopter device below:
a Rafflecopter giveaway
About the Author 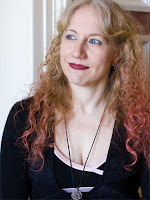 Jane Kindred began writing fantasy at age 12 in the wayback of a Plymouth Fury—which, as far as she recalls, never killed anyone…who didn’t have it coming. She spent her formative years ruining her eyes reading romance novels in the Tucson sun and watching Star Trek marathons in the dark. Although she was repeatedly urged to learn a marketable skill, she received a B.A. in Creative Writing anyway from the University of Arizona.

She now writes to the sound of San Francisco foghorns while two cats slowly but surely edge her off the side of the bed.


You can find Jane on Twitter, Facebook, Goodreads, and her Website.
Labels: Entangled Publishing, Giveaway, Jane Kindred, The Fallen Queen, The House of Arkhangel'sk, The Midnight Court
Email ThisBlogThis!Share to TwitterShare to FacebookShare to Pinterest