Vote Percy Jackson in the YA Crush Tourney!

For the next 24 hours my co-advocate (everyone should have one of these for real!) Ashley from Wholly Books and I are participating in the YA Crush Tourney, representing the son of the sea god Poseidon, child of the prophecy, Roman legionnaire, and crush to be reckoned with -

Are you swooning yet? You should be. Imagine this - dark black hair, deep sea green eyes, tall, loyal, a sarcastic sense of humor, and willing to save the world again and again. He's risked his life to save his friends, as well as his enemies, throughout two series of books.


“Your fatal flaw is personal loyalty, Percy. You do not know when it is time to cut your losses. To save a friend, you would sacrifice the world. In a hero of the prophecy, that is very, very dangerous.” - Athena, The Titan's Curse p. 298

But every hero has a fatal flaw. Percy Jackson? He’s too loyal to his friends. He cant’s give them up, not for anything. He was told that, years ago. And someday soon, he’s going to face a sacrifice he can’t make.” - Mars, Son of Neptune p. 364 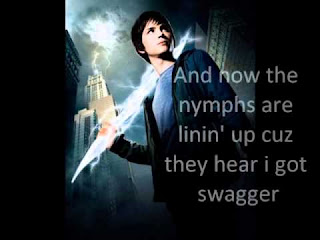 Wait, what?! NO! Percy HAS a girlfriend! Yes, I know we should avoid guys that are spoken for, but how can we not daydream about him after seeing how he treats Annabeth? Percy does everything in his power to keep her out of danger. I mean, he took the weight of the world so it wouldn't be on her shoulders! (If you've read the books, you know exactly what I'm talking about.) And how can you not fantasize about a boy kissing you like this:


“We held hands right up to the moment they dumped us in the water.
Afterward, I had the last laugh. I made an air bubble at the bottom of the lake. Our friends kept waiting for us to come up, but hey when you’re the son of Poseidon, you don’t have to hurry.
And it was pretty much the best underwater kiss of all time.” - Percy Jackson, The Last Olympian p. 374

I'll be honest with you - Percy is not a bad boy. He's not a rock star, he's not an alien, and he's not an angel. Percy Jackson is just a kid with dyslexia and ADHD who just happened to be lucky enough to live in a literary world where being a demigod makes life in "reality" hard. It gets even more difficult when he joins others like him at Camp Half-Blood. He has to battle monsters, former friends, titans, and more, but Percy never loses sight of what is important to him or what he believes in. He is always willing to sacrifice everything he has to do what is right. (He even gives up something nearly anyone would dream of in order to have the gods grant the dying wish of his enemy!)

A good man (or kid, boy, whatever) is hard to find in YA, and Percy Jackson definitely fits the bill. Give your vote to the good guy who will save the world again, and again, and again. Just click on the picture below, and it will take you straight to Percy's match so you can vote.

After you've been so kind as to vote for Percy, please throw your information into the Rafflecopter form below. You can also get extra entries for tweeting about Percy's match (ONE TWEET = ONE ENTRY), but please do not do them all at one time. As for the prize, you could win your choice of ANY of the books featuring our crush. Depending on the number of votes Percy receives, I'll be throwing in extra winners. If Percy WINS this round, I will give away a boxed set of the first series, The Heroes of Olympus to a lucky voter.
a Rafflecopter giveaway
Labels: Giveaway, Percy Jackson, Team Percy, YA Crush Tourney, YA Sisterhood
Email ThisBlogThis!Share to TwitterShare to FacebookShare to Pinterest