My First Review of the First Book I Ever Read

I’ve been struggling with the choice of what book to review first. I tried deciding by genre. Urban fantasy maybe? I LOVE The Dresden Files series (Jim Butcher). Or a space opera? I just finished A Rising Thunder (David Weber). The thought kept rattling around my empty skull, until a thought made its presence known. Since this is our first review, let’s make it about the first book we ever read. You may have noticed a plural or two there. Nothing to see here. This is not the multiple personality disorder you’re looking for. *waves Jedi arm thingy frantically* 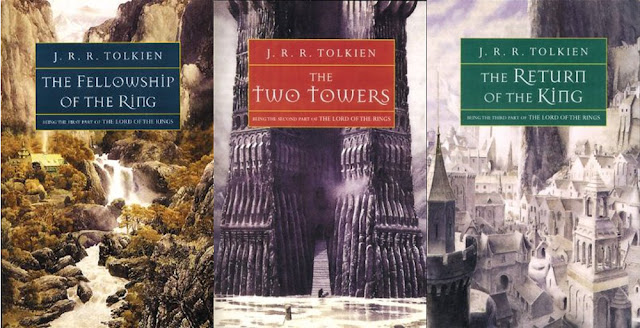 I have read books before The Lord of the Rings. I even remember a few titles. Sandokan, The House of the Spirits, and that’s ALL I remember! And I only remember the titles at that. I do know there were some pirates in Sandokan. Maybe some jungle. Maybe a turban or three? And The House of the Spirits was about a... haunted house or something. I wasn’t paying attention. Ghostbusters anyone?(Whoyougonnacall!?)

So, even though I have read books before, they obviously left no impression whatsoever. The Lord of the Rings on the other hand, changed me. It gave me magic, wizards, elves, dwarves, quests, evil overlords. It’s important to me. It’s (dare I say?) precious. Jeje*.

So, how do I review a book that’s as reviewed as this one is? I’m sure there are better reviews, and better reviewers than me out there. So the only thing I can do to make this my own, is to relive my memories of it, hopefully through the eyes of a kid who didn’t like to read and who found out just how wrong he was. Later on I’ll re-read it and review it again from the perspective I have now, with a few more reviews under my belt. But this one will be from memory.

The story is about personal growth, as I see it. Empires balance on a sword’s edge, lives are lost, races face extinction, all this is true. But what got to me were the personal struggles. The fight against greed, corruption, temptation, darkness. Don’t get me wrong, the battles and riding around were fantastic. I still get a bit of chills imagining Gimli, Legolas and Aragorn chasing after the Uruk Hai to rescue Pippin and Merry. The mental picture of the armies of Gondor, or when Rohan arrived just in the nick of time to save the day, still fill me up and make me want to ride with them. I’d get killed right away, but that’s what’s nice about books. I get to ride next to Théoden into battle and face the Nazgûl. In my head I kick so much ass, you don’t even wanna know!

But that’s not what makes any of the characters move. It’s the inner fights that leave lasting memories for me. Frodo carrying the weight of the ring, Sam looking after his master, Aragorn fighting to save his line and the world, Boromir losing his own battle. It’s these struggles that allow me to connect to them. Could I have fought the insidiousness of the ring? Could I have supported Frodo from the Shire to Mount Doom like Sam did? Faced with Boromir’s decision, would I have fallen like he did. Maybe. And that’s what I love about this book. It gave me a new world, when the one I was living in wasn’t all that good. It let me lose myself inside a grand quest to save a whole world, by riding with the fellowship and suffering and rejoicing with them.

The writing is fantastic. Tolkien is my master. I want to carry his children and feed his pets. If I close my eyes now I can see the Shire. I can see the fellowship riding towards their destiny. I can see Moria. I can see the Balrog. Now, tell me. If you read the LOTR, how can you not be awed by the Balrog. And if you saw the movie, how can you not have a nerdgasm! I just got goose bumps thinking about it! You shall not pass?!? YOU AIN’T CROSSING THIS BRIDGE BALROG! TIME FOR UNCLE MAGN... GANDALF TO MAKE YOU HIS BITCH! Don’t even get me started on the memes. Just. Don’t.

*15 minutes later* Ok *twitches* I’m back *twitch*. One does not simply stop looking at memes. *twitch*

When I look back at the trilogy now, I get is this warm fuzzy feeling. Nostalgia for old friends and an old story, still new and relevant even after all these years. Like the feeling I get when I come back home. Familiar and comfortable. Full of magic and elves. Fantasy at its best. I have a few more books to read before I can read the trilogy again, but I most definitely will.

I’m looking forward to going back for a visit at Bag End, have some elevensies with Frodo, Sam and the gang, and read from the red book while we wait for Gandalf, Aragorn, Legolas and Gimli to arrive. It’s going to be grand. Why don’t you join us! Plenty of room around the fireplace. Grab a cup of tea and a lembas. Let’s listen to some adventures.

*That's just the Chilean showing. ;-)
Labels: Adventure, Fantasy, Favorite, J R R Tolkien, Magic, Sandokan, The Fellowship of the Ring, The House of the Spirits, The Lord of the Rings, The Return of the King, The Two Towers, Will
Email ThisBlogThis!Share to TwitterShare to FacebookShare to Pinterest