Reading with No Expectations

First of all, why do I get ideas to write a post when I’m about to fall asleep and have nowhere to write? I wrote pretty much this whole post last night and now I only remember bits and pieces… GAH!

Second of all, I should be working instead of writing this. But if I do, I’d have forgotten even more of what I wanted to say. So… PROCRASTINATION ON! *whirring sound* 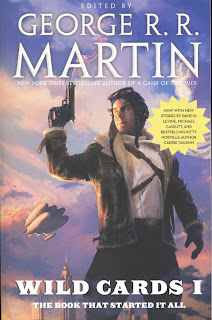 I’ve been reading a book recently called Wild Cards, an anthology edited by George R.R. Martin. The idea sounded interesting, with ordinary people gaining super powers. The editor is famous and supposedly a REALLY good writer. (Confession time – I have never read anything by Mr. Martin... Now I feel dirty...) Yes, I recognized the names of some of the authors in the anthology, such as George R.R. Martin, Roger Zelazny, so on and so forth. So it should have been an enjoyable experience, right?

Wrong! It wasn’t the book’s, the editor’s, or authors’ fault, but my own.

I’ve made a habit of not reading blurbs, reviews, plots, summaries, etc. so as to not let myself be biased by other’s opinions or even my own preconceptions of what the story will be like. I don’t need much to choose a book to read. Does it have magic? Fantasy? Spaceships? Lasers? Explosions? Monsters? Zombies? Then count me in!

But this time, I let myself get trapped by the things I saw, but didn’t truly see. I didn’t read blurbs or reviews, but I let myself get drawn by the names of the editor and authors and the allure of superpowers. So I went in expecting a superhero story. Full of flying, super villains, saving the day, getting the girl, you know. Superhero stuff. What I got instead was a human story – characters with failings, feelings, mistakes, and the darker side of human nature. There was flying, super human strength, time stopping and everything. But there was also alcoholism, murder, betrayal, weakness. The characters were human, and it caught me off-guard. I went in expecting something based on my own silly preconceptions and got the story as was written, not what I thought it was going to be.

And so I made the mistake of judging the book by its “cover”. I realized this halfway through, and it took me three quarters of it to shake the feeling and look back on the story to see it as it was meant to be seen. My experience with this book led me to wonder, how many other books have I made this mistake on – the books I didn’t like because they weren’t what I thought they were going to be. Don’t get me wrong, some I really haven’t liked. But maybe not every single one, if I had read them with no expectations.

So I ask you, has this ever happened to you? Did that book really suck, or were you let down by your own expectations?