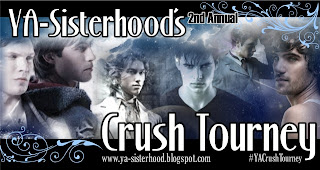 As you may have gathered by now, I'm the advocate for #TeamPercy in the YA-Sisterhood's 2nd Annual Crush Tourney. However, I want YOU on the team! Percy wants you on the team. Either way, I am willing to offer you a bribe. I am offering up pre-orders of the newest book that features Percy Jackson that you can win: 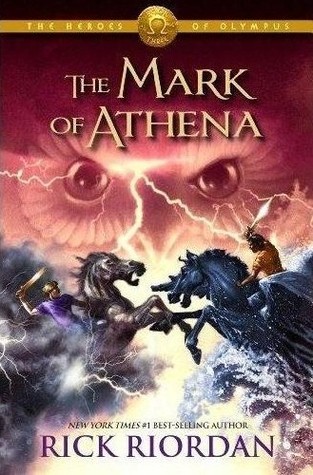 Yes, that's right - The Mark of Athena (The Heroes of Olympus #3) by Rick Riordan. It will be releasing in October. All you have to do is change your profile picture on your social networking sites, hustle your followers to vote, etc. I'll also manually add entries for you being awesome on the team. I will also add another pre-order for each round Percy makes it through, in addition to the other prizes.

What are the other prizes? Well, so far it's going to be funded by me and maybe some of the other members of Team Percy. We're still working on the details. I will link you to EVERYTHING. As for the author, I don't have a lot of hope for Mr. Riordan's involvement because he is a very busy man. I am going to try to go through other channels to get word to him. Anyways - prizes. If you vote for Percy, you will earn an entry. You can also earn entries for tweeting and other social networking goodness. I will be giving away a choice of any book featuring Percy Jackson, and probably throwing in extra book prizes. If Percy wins his first round against Patch from Hush, Hush, then I will give away a Boxed Set of Percy Jackson and the Olympians. Yes, I will give away the first five Percy Jackson novels. This is in addition to the pre-orders for  being a team member and the voting prizes.

What are you waiting for? Join Team Percy today!

a Rafflecopter giveaway
Anywho, grab yourself a button of your choice and play along!

Thank you to the YA Sisterhood for the tourney and Avery at Avery's Book Nook for the fantastic new buttons (the bottom two)! *dances*
Labels: Giveaway, Percy Jackson, Rick Riordan, Team Percy, The Mark of Athena, YA Crush Tourney, YA Sisterhood
Email ThisBlogThis!Share to TwitterShare to FacebookShare to Pinterest