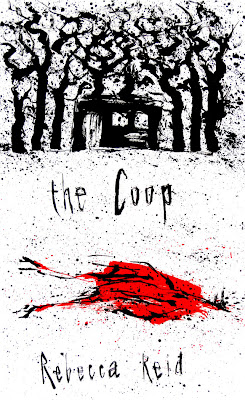 A psychological thriller about the destruction of innocence.

Enter The Coop, a dark and mysteriously misleading psychological thriller.

A girl, apparently imprisoned in a room, is the thread of mystery running parallel to the tale of Thatchbury village.

Meet Howard and Lilly. They take you on a journey through Thatchbury where Mathew, the child from the coop, shoots Jodie Tiding, and so unravels the history of his loveless raising, her innocence and the dramatic events leading them to disaster.

The Coop is a darkly compelling vision of the layers of consciousness. Although conceived as the first novel in a trilogy, The Coop stands alone as a brilliant individual work of fiction.


My Book, a Reflection of Moi? Never.
by Rebecca Reid

We have all heard the saying “write what you know”, right. The thing is, it’s what we don’t know that excites us. Isn’t that why we read? Isn’t that also why we write? To experience the unreachable. To create the unimagined. Why then, if you voice the slightest inquiry regarding your writing do you always get told, “just write what you know” – this is often accompanied by a subtle shoulder squeeze or a pitiful pat on the back. Entirely uninvited and in my case, unrequited, I am far from a touchy feely kind of person, more especially in a moment of angst. I say angst, because to voice any kind of query regarding my writing, I must be in a bad place. Anyway, who wants to hear “write what you know”. Could anything be less stimulating to a defunked brain?

However, no matter the genre or topic, it is solemnly true that despite how uninhibited ones writing may be, real life and not just anybody’s, mine as the author, drips onto the pages. Yes, clearly the day-to-day habits of human kind are a reflection of real life; that is understood, what I am referring to are the subtleties within the story. A scene. Perhaps even a chapter. There will be something, no matter how small or insignificant, within every novel that is a true reflection of its creator.

My husband came to me just the other day inquiring as to whether his grandparents and their hen keeping were, in some obscure way being reflected within my novel The Coop. It took me a moment to respond. My initial reaction was no, of course not. The words shot around my brain before being churned out and replaced with a vividly pensive question mark. Had they been the subconscious influence that brought on the creation of Mrs. Cauldwell and the chicken coop? Well, yes, I began to realize they had. Of course, they had. Ideas, creation, they come from somewhere. They are stimulated within you by an image, a sound, a flashing thought. Every plot has been sourced from within and its roots are bound to you through something you have experienced. It doesn’t make hearing that irritating saying any easier to digest, but it does make you realize that every piece you read is never that far from reality.


Pick Up Your Copy of The Coop at Amazon!

Rebecca Reid was withdrawn from school due to illness at fourteen. Being limited in the things she was able to do, she wrote all the time − poetry, stories, feelings, thoughts. At 16, she had her own page in the local weekly newspaper, the Bangor Spectator, in which she covered anything and everything: fashion, beauty, film, teen issues etc. At 17 she became a model, doing catwalk, photographic work, and TV. In 2008, she graduated in English from Queens University, Belfast, and she was awarded an Arts Council writing grant in 2009. Married in 2007, she lives in Northern Ireland with her husband and their three daughters. The Coop is her first novel, and part of the Thickets Wood Trilogy.