Review: Cruise of the Undead by Laura A. Hansen 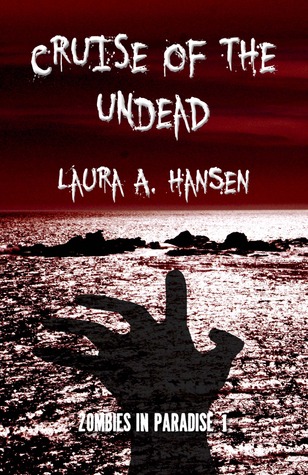 Zombies on a cruise ship. What would you do?

Fifteen-year-old Charlie is P.O.'ed that his parents have wasted a perfectly good Christmas break by forcing him on a cruise with a bunch of oldies. But the old people are a piece of cake compared to the dead people. Some late night sneaking around by Charlie and his brother Jack convince them that the unimaginable is really happening: the recently dead are walking the ship. After a gruesome attack at the Death by Chocolate Buffet, a seriously scary comedy of clashing personalities occurs when intense Charlie and his hip hop, extroverted younger brother Jack forge an alliance to defeat the zombie menace. The boys and their friends take on the zombie crew in a gripping struggle to save themselves, their families and the other passengers from an ugly undeath.

With horror, humor, and a dash of romance, this fast-paced adventure races through the zombie-infested South Pacific.

I must say I enjoyed this book. I stopped being a fan of YA when the fourth book of the Percy Jackson series grabbed the part of me that liked YA and broke its kneecaps, slapped it around, killed its puppy and gave it a wedgy. You may think I’m overreacting, and maybe I am, but that’s the way it felt. It made me want to punch Percy in the throat. Which is kinda funny considering Kayla was advocating in Team Percy over at good reads. Nice to have met you!

Oh, wait. Still alive? No sniper shot to the back of the head? Kayla must be busy. No Will, I'm here, and I'm watching you. So, on to the review of Cruise of the Undead!

What’s worse than zombies? Zombies in a closed environment. What’s worse than that? To be stuck with your parents and little brother on a cruise while dealing with a zombie outbreak. I feared this book would bring back all the anti-YA feelings I had stored up inside. Stored under my fear of clowns. IT really messed me up. Freaky, big-shoed bastards. *shiver*

But it didn’t. I actually enjoyed the book. It moved fast, the teens weren’t AS teennoying as I feared they would be, and I liked the story too. I found myself liking the characters, except some of the adults. Douches. 'Specially you in Deck 8. Ass!

I’m used to reading zombies in vast pieces of land, armies involved, or maybe even superheroes. This time it was kids, from 12 to 16 year olds, and inside a cruise ship. It was a refreshing change of pace. No world shattering consequences, no aliens, no doomsday prophecy, no magical weapon to find. Just kids trying to survive both zombies and hormones.

I think I would have found some of the actions of Charlie, the main character, really annoying if I hadn’t had some uncomfortable flashbacks of my own teenage years of being a douche. But other than that, I had a good time reading the book. I especially liked Jack, Charlie’s little brother. He was funny. Charlie was pretty good too, when he wasn’t being a teenager.

I must say though. There were two reasons why I decided to give YA another chance. First, I needed a break from all the high fantasy and sci-fi. I love them, but every now and then you need to step out and have a breath of fresh air. Second, this was the first review request that was actually addressed to me, by name, which made me a happy reviewer. Bonus reason, zombies. Cause… ZOMBIES!

All in all, a good palate cleanser and an enjoyable YA adventure. Opened me up to maybe trying another YA in the future. Hopefully as fun a read as this one. And even more hopefully, there’s another Zombies in Paradise in the works. I wonder where the story will go next. A resort maybe? In Mexico? Or Chile? Uuhhh, in a plane!


Buy your copy of Cruise of the Undead today on Amazon!
Be sure to add it to your TBR pile on Goodreads

Labels: Cruise of the Undead, Laura A Hansen, Review, Science Fiction, Will, Young Adult, Zombies
Email ThisBlogThis!Share to TwitterShare to FacebookShare to Pinterest