Review: The Egyptian by Layton Green 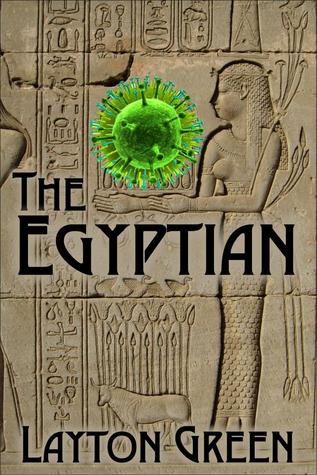 At a mausoleum in Cairo’s most notorious cemetery, a mercenary receives a package containing a silver test tube suspended in hydraulic stasis.

An investigative reporter tracking rogue biomedical companies is terrified by the appearance of a mummified man outside her Manhattan apartment.

A Bulgarian scientist who dabbles in the occult makes a startling discovery in his underground laboratory.

These seemingly separate events collide when Dominic Grey and Viktor Radek, private investigators of cults, are hired by the CEO of an Egyptian biomedical firm to locate stolen research integral to the company’s new life extension product. However, after witnessing the slaughter of a team of scientists by the remnants of a dangerous cult thought long abandoned, Grey and Viktor turn from pursuers to pursued.

From the gleaming corridors of visionary laboratories to the cobblestone alleys of Eastern Europe to a lost oasis in the Sahara, Grey and Viktor must sift through science and myth to uncover the truth behind the Egyptian and his sinister biotech – before that truth kills them.

I write this review from an undisclosed location, with a tummy full of awesome carrot cake. It has chunks of pineapple in it! There were two loafs yesterday… now there’s only half of one. JUST ONE HALF!!! How can this be?!? It shall be remedied, soon I hope, with pineapple upside down cake! Woot! Small sweet-tooth rant over, I shall proceed to the review.

I decided to read this book based on the blurb, which you can see above thanks to the awesome Kayla and her amazing editorial skills, and because I needed a break from fantasy and sci-fi. Damn good idea, because this book is great! It has ancient beings, myths, shady corporations, a scrappy investigative journalist, a messed up in the head bad guy, and a ruggedly handsome revie… main character! I meant main character. *ejem*

This is the second book in the Dominic Grey series, but it stands alone pretty well. There are some mentions of events and characters from the previous book, but you find out enough about them during this one to feel clued in. And they don’t really contribute or detract to the main plot of the story.

The author did a good job of slowly unveiling Dominic Grey’s past and how he got to be who he is, and how he got to where he is. I liked Dominic. Dark and brooding with a hard past. A broken man in many ways, but kept together by a strict sense of honor and iron will. I can see why the author would base a series on him. He’s a solid building block for a series.

The first thing I liked about the book was the writing style. I love multiple POVs. Ever since I first read Tom Clancy, I’ve been a fan of them. I don’t mind single person view points, but in this case I liked the characters so much that I enjoyed seeing things from their perspective. I also liked how it all came together in the end. All the stories and personal beliefs came to play and had their say in how everyone acted and what they chose.

I also liked the plot a lot. Occult research into eternal life, shady corporations, crazy bastard henchman, a glimpsed, bandaged, man-shaped figure in the woods. Creepy! I got drawn into the story and really wanted to know what was going on. There were moments that gave me chills. Ugh.

Don’t let me forget the creepy factor! I’m not particularly scared of alien beings, fictional evil, and mythological entities. Good old fashioned human greed and fucked-up-in-the-headitude. (if that’s not a word, then I made it up. Bazinga!) THAT’S the scary bit. And the author played on the human factor very, very well.

That’s what made this book an enjoyable experience. The time I got to spend in each of the character’s heads, going through their thought processes, how they experienced things. Watching the bad guys be evil and do weird, creepy things. The half glimpses of truths the author let slip here and there. There was definitely suspense, and it only continued to build as the story progressed.

How it all coalesced, or unraveled depending on where you look at it from, was great. It all came to light, good and bad. I don’t know how to describe it without saying more than I should. I don’t want to be spoilery. I will say this, it left me wanting more.

I wish I didn’t have so many other books in my to read list, so I could go back and read the first book in the series. AND there’s a third in the works (!!!) – The Diabolist. Now, with a name like that, how could you not read it?! I know I definitely will.


Buy your copy of The Egyptian today on Amazon.
Be sure to add it to your TBR pile on Goodreads!