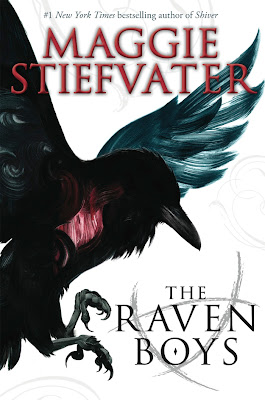 The Raven Boys is the latest novel from popular young adult novelist, Maggie Stiefvater. It tells the story of Blue Sargent, who lives with her mother in a household of psychics, and four boys who attend Aglionby Academy - Gansey, Adam, Ronan, and Noah. Blue has always been told that her true love would die if she ever kissed him, but she did not know that the first ghost she would ever see belonged to someone who hasn't died.

Even though I've never been a fan of Maggie Stiefvater, there is no denying the beautiful style of her Writing - especially in The Raven Boys. We're given a lovely blend of mysteries, ghosts, leylines, Welsh mythology, brotherhood, and just a touch of romance. The storytelling and writing is smooth, though luscious, and will appeal to both teen and crossover adult audiences. I can also see it appealing just as much to male teens with the novel centering more on mystery and mythology than the romantic aspect of things.

The story focused primarily on Blue, the psychic's daughter; Gansey, the saucy rich boy obsessed with finding lost things; Ronan, the broken bad boy with more issues than National Geographic; Adam, the poor local scholarship student; and Noah, who seems just a bit off. Additionally, there was a multitude of minor characters that were just as fascinating and given nearly as much depth as the protagonists. Maura Sargent's psychic roommates, Persephone in particular, were the aunts and cousins that I never knew I wanted. I'm trying to avoid saying too much because I'm afraid to spoil even the tiniest thing. That being said, the characters and the writing is the very best part of the book. 5/5 Stars

Once I started reading, I was immediately drawn into the fictional town of Henrietta, Virginia by Stiefvater's World-Weaving. The location was beautifully described, though far too eerie to be anywhere I'd like to visit, and I could see every setting of this novel clearly in my mind's eye. The graveyards, churches, leylines, and everything were presented in such a way to make perfect sense to me. The way Stiefvater tied the Glendower myth into the story was genius. There was enough history and mythology to make me a very happy girl, but not too much to turn off less voracious readers. The world of The Raven Boys is one that most people can enjoy. 5/5 Stars

The Raven Boys is another book that I feel I must throw the Pacing and Attention Span together for reviewing purposes. While the story dragged a bit in some areas, it was constantly on my mind - even as I did other things. I gave myself a full week to read it because I wanted to savor it. Things unfolded quickly enough in the novel, but I like to simmer when it comes to books with twists and numerous pockets of information. The drag at the start of the novel may be off-putting to some, but it is well worth it in the end. 4/5 Stars

Would you want to choke me if I told you that the Extra Magic of The Raven Boys is the magic? Yes? Well, there wasn't really magic, per se, in the novel, but it was definitely an outstanding ghost story. I have not read many young adult novels that weaved psychics and ghosts together in a way that wasn't trying to scare your pants off, and it was nice. The Raven Boys consists of good, old-fashioned storytelling of a world and characters that drew me and kept me hook (even at the few slow parts) until the very end. Also, I appreciate the lack of a nail-biting cliffhanger. (But do not for a moment assume there was none.) One final thing that I would like to mention is that I have been writing and rewriting this review - finally scrapping the entire thing I was working on - because I don't feel I can say enough to do this book justice. This is far and away my favorite fall read to date. 5/5 Stars*


The Raven Boys is available to purchase today at your local bookstore or online.
Amazon | Barnes & Noble | Book Depository | Fishpond
Be sure to also add it to your TBR pile on Goodreads!


*Yes, I need to get stingier with my "5 Star" bestowings, but I've really been reading great books!

To satisfy FTC guidelines, I am disclosing that I received the book for reviewing purposes as a part of a Southern Book Bloggers tour in exchange for an honest review. The advance copy was provided to the tour by the publisher, which has in no way affected the outcome of my review. All opinions expressed are rambling, honest, and completely my own.