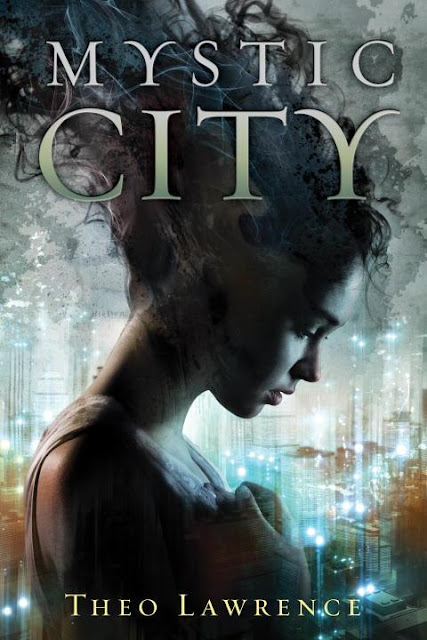 Mystic City is the young adult debut novel by Theo Lawrence. It is set in an alternate Manhattan, or Mystic City, that has been built up by magic from the mystics, who are now drained and forced to live at the flooded ground level with the poor in their own semi-quarantined zone. The story centers on Aria Rose, the daughter of one of the ruling families of Manhattan, who is suffering from memory loss due to an overdose from Stic.

As many of you may have noticed by now, I have a pretty eclectic taste in books. I don't even know when I pick one up whether or not it will be for me. I was actually a little worried about this one when I received the ARC. I liked Romeo and Juliet (I've read books comparing the two, and the comparison is made in the book itself) just fine, but Shakespeare retellings are usually gag-inducing for me. I usually don't do well with love triangles, politics, forbidden romances, and so on. However, I really loved this book, and read it in less than 12 hours.

The Writing of Mystic City is a perfect example of what I have grown to love so much about young adult literature. I never felt like I was participating in a literary triathlon by trying to follow the story, but at the same time it never felt like it was dumbed down appeal to teenage readers. (I know not all YA books do that, but there are some. Oh yes, there are some.) Many of the same themes are present in Mystic City that were also part of Romeo and Juliet (warring families, forbidden love - basically the same things I mentioned before, except for the love triangle), but the novel was not just a fleshing out of the bones of the play. I would call it more of an homage than a retelling.

Aria Rose is not the simpering, wilting Juliet that I expected from Mystic City either. She is a socialite/celebrity, but she is not afraid to get down and dirty to get the answers she craves due to her lost memory. She may not be tough or have special powers, but she is pretty ballsy, and there is little I love more than reading about an empowered girl in YA. (Yes, she is chasing after guys, but didn't we all at that age? Let her be seventeen.) So as far as the writing goes, no complaints from me. I loved it, and I think many teens will as well. 5/5 Stars

The World-Weaving of Mystic City is very fascinating. I did not realize that this book was set in an alternate reality until probably halfway through the book. I suppose I should have gathered that from the "In this Manhattan..." from the book's summary, but I guess I didn't pay much attention to it. However, I am down for alternate reality, speculative fiction, epic fantasy - you name it. So it didn't matter much to me what was going on. In any case, Manhattan has been flooded due to global warming and the melting of ice caps and glaciers. I've only been to New York once, so I was able to buy how things were after something like that happened. The rich people lived at the tops of the skyscrapers (the Aeries) and the poor people were left on the ground. (It wasn't all flooded, but it sounds a bit Venetian from the descriptions.) Of course, the poor normal people and drained mystics were allowed to be servants in the Aeries.

My one issue with the World-Weaving is that I wish there was more history. If a book is set in an alternate universe or whatever, I would love to know what the differences are. The only thing really even mentioned was one of the presidents, and the global warming. I'm not asking for the level from Orson Scott Card's Alvin Maker series, but I'm a history buff, and I want some beef. Being as this is the first book in the Mystic City series, I'll cut Mr. Lawrence some slack and keep the chopping block polished for the next book. 5/5 Stars

The Pacing and Attention Span go hand-in-hand for me with this novel. The pacing was quick, and I stayed at the edge of my seat throughout Mystic City. There were betrayals, twists, and drama left and right, and I never really even had time to make guesses about things. (Yes, I had the main storyline figured out, but I don't think that was supposed to be some big huge secret.) As I said before, I read this book in approximately 12 hours, including my seven hours of sleep. Unless this is downright Not Your Thing, I can't seeing it losing your interest or attention. 5/5 Stars

Now that we've finally made it to the Extra Magic, I can't really put my finger on it exactly. The characters were likeable (even if it's only because I liked to hate them), the story was good, and Theo Lawrence did a great job of writing Mystic City. I will definitely be recommending this to my library patrons, and I hope you get around to reading Mystic City, too. 5/5 Stars


Mystic City is available to purchase today at your local bookstore or online.
Amazon | Barnes & Noble | Book Depository | Fishpond
Be sure to also add it to your TBR pile on Goodreads!

Stay tuned tomorrow for a giveaway!